Day 1 –   Jose de Sousa claimed victory on the first day, with an 8-1 final defeat of Luke Humphries, to include an outstanding average of 114. The Portuguese thrower also enjoyed  similar averages earlier of 101 v Mach Kuivenhoven, a 111 against Brendan Dolan and a semi final 104 over Krzysztof Kcluk. ln the final, legs of 10,11,11,14 and 12 were just too much for the former World Youth Champion, Humphries.

Current Premier League star Nathan Aspinall, fired in a 9 darter, but eliminated in the last 16. MvG and Barny crashed out in the fist round.

Day  2 –   More fireworks in the 2nd Players Championship, with two 9 darters, the 1st from de Sousa, in his whitewash of Jermaine Wattimena, with a 117 ave. only to lose in the last 8. The 2nd from Stephen Bunting in another Ron Meulenkamp whitewash, in the 2nd round.

World no. 8 Michael Smith, was the eventual winner, 8-5 over Ross Smith, the victor overcoming Dimitri van den Bergh 6-2 in the top 16 and a tasty 114.5 ave thrown in. Barny made the last 8.

Day  3 –   A very happy Dutchman Dirk van Duijvenbode, claimed his 1st PDC ranking title, 8-6 over compatriot Martijn Kleermaker, who missed 5 darts in the 14th leg to force a decider. MvG only made it to the last 64 and Barny withdrew from the touney on medical grounds. Rob Cross lost in the quarters to  Dolan6-4.

Day  4 –   Closing SS3, van Duijvenbode, almost made it 2 on the trot, losing out in the final to Dimitri 8-7 , surprisingly his 1st ProTour victory. His first 4 wins were all achieved with 100+ averages. Duijvenbode had earlier whitewashed Simon Whitlock, in the top 16 with a 100+ ave. the Aussie despatching MvG 6-3 a round  previous. Krzysztof Ratajski landed yet another 9 dart leg in his opener to Keanne Barry. 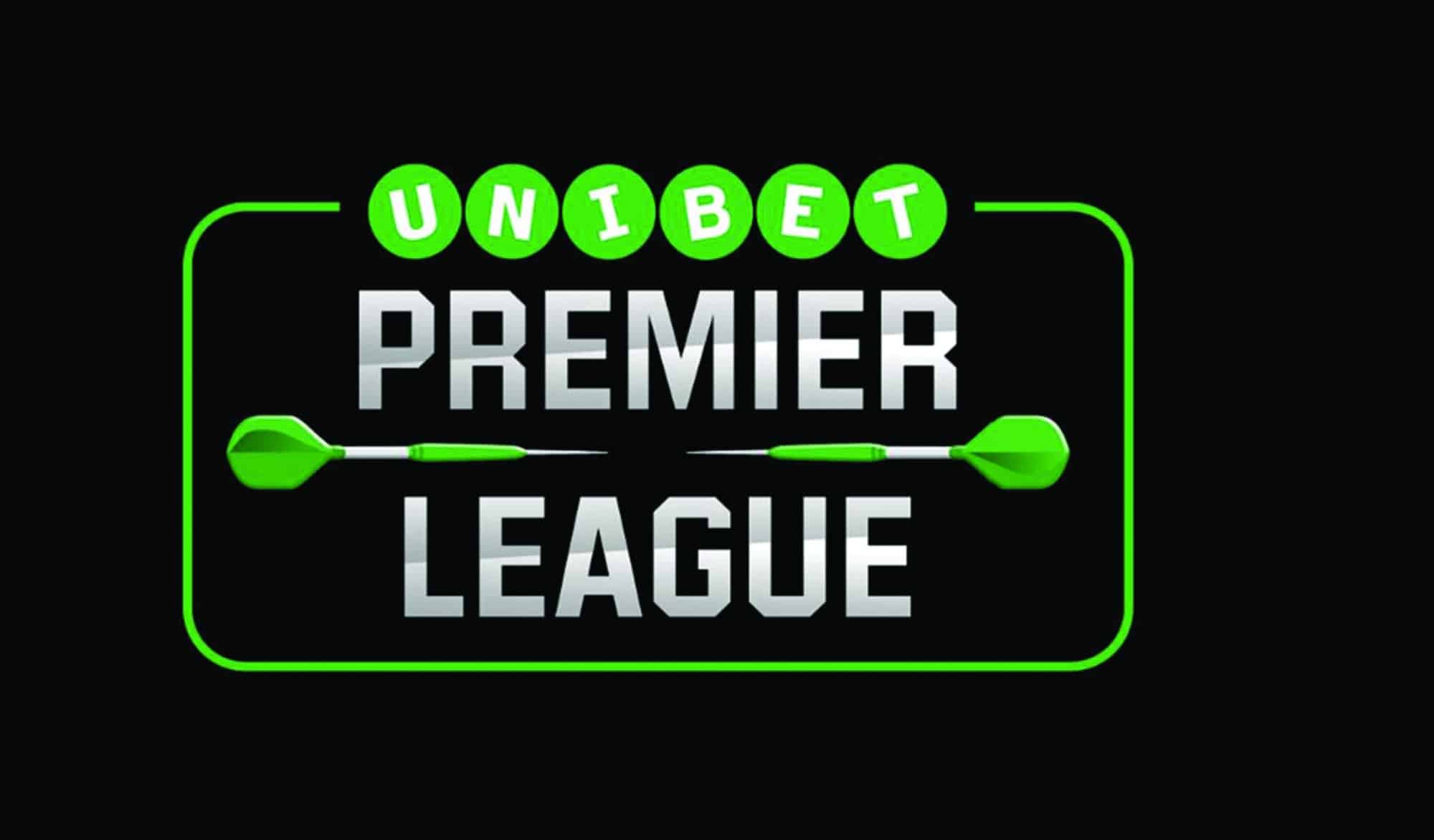 lt’s all to play for at the Marshall Centre, Milton Keynes, as last week’s penultimate session concluded. May 24th – 27th will be the last opportunity for the 8 players to make the K.O. semi final stage on May 28th.

The 4th and last match of the evening, featured a troubled Wright , using yet another set of darts and Aspinall who looks totally at home rubbing shoulders with the games ” big guns “. l’ve never seen so many loose darts from Wright and whilst he won 5 legs, with occasional flashes of brilliance, if he’d played either of the 2 previous players, he would come away legless. The Asp returned 5×180, 177 and an outrageous 161 out in the 9th.

With both de Sousa and Wade on the periphery of the top 4 and finals night, it wasn’t surprising they ended up sharing the spoils. The Portuguese broke throw in the first on a 65 out and didn’t look back as he opened a 6-2 lead, Wade’s main contribution a 13 darter. De Sousa showed his brilliance , or if you prefer folly, by taking out 72 on two D18’s.

Missed opportunities however, allowed Wade to recover to 6-5, before his opponent nailed D5 for 7-5 and a point. A further 3 missed chances allowed Wade to get to 7-6. De Sousa should have taken the last for victory but missed his 4th match dart, Wade accepting his generosity for a draw. De Sousa 10×180.

Wright’s woes continued in his encounter with former World Champ Anderson, a possible shoulder injury the reason for his lack of form. However, Anderson’s form in this match, may still have been beyond Wright, injury or not. The Scot was close to his best with a 105.24 ave. a 57% double stat and 5×180. There’s no way back for Wright.

Clayton has got the better of MvG of late, but not this time. Both didn’t produce what they are capable of, MvG’s experience just tipping the scales. An early 117 out from the Dutchman pointed to another exhibition display but it wasn’t to be. A 14,13 and the match winning 124 out on the bull, from the Green Machine, the highlights from this dogged encounter.

MvG versus Wade was one the best matches you are likely to see. Van Gewen’s tally of 5×12 dart legs, absolutely incredible, Wade enjoyed two, but the averages whilst not the best, make interesting reading. MvG ended with 107.44, Wade even better on 110.28. Explanation – the Green Machine’s clinical finishing meant Wade’s average hardly included any wasted double double darts.

The Asp lost his 2nd consecutive game to Clayton in a tentative contest that included a 24 darter on D1. There were numerous wasted darts, unsurprisingly both players ending with low 90+ averages.

Sticking my neck out l don’t think the Asp will qualify for the K.O. stage, but his time will surely arrive, but not in this tourney. 5×180 from the Asp, but a low 21% double conversion. Clayton a slightly better 27% and an 11 dart leg.

Shame a 2 week break precedes P.L. resumption as Anderson would definitely be a danger. He seems to have found his mojo beating an in form Dimitri in style. 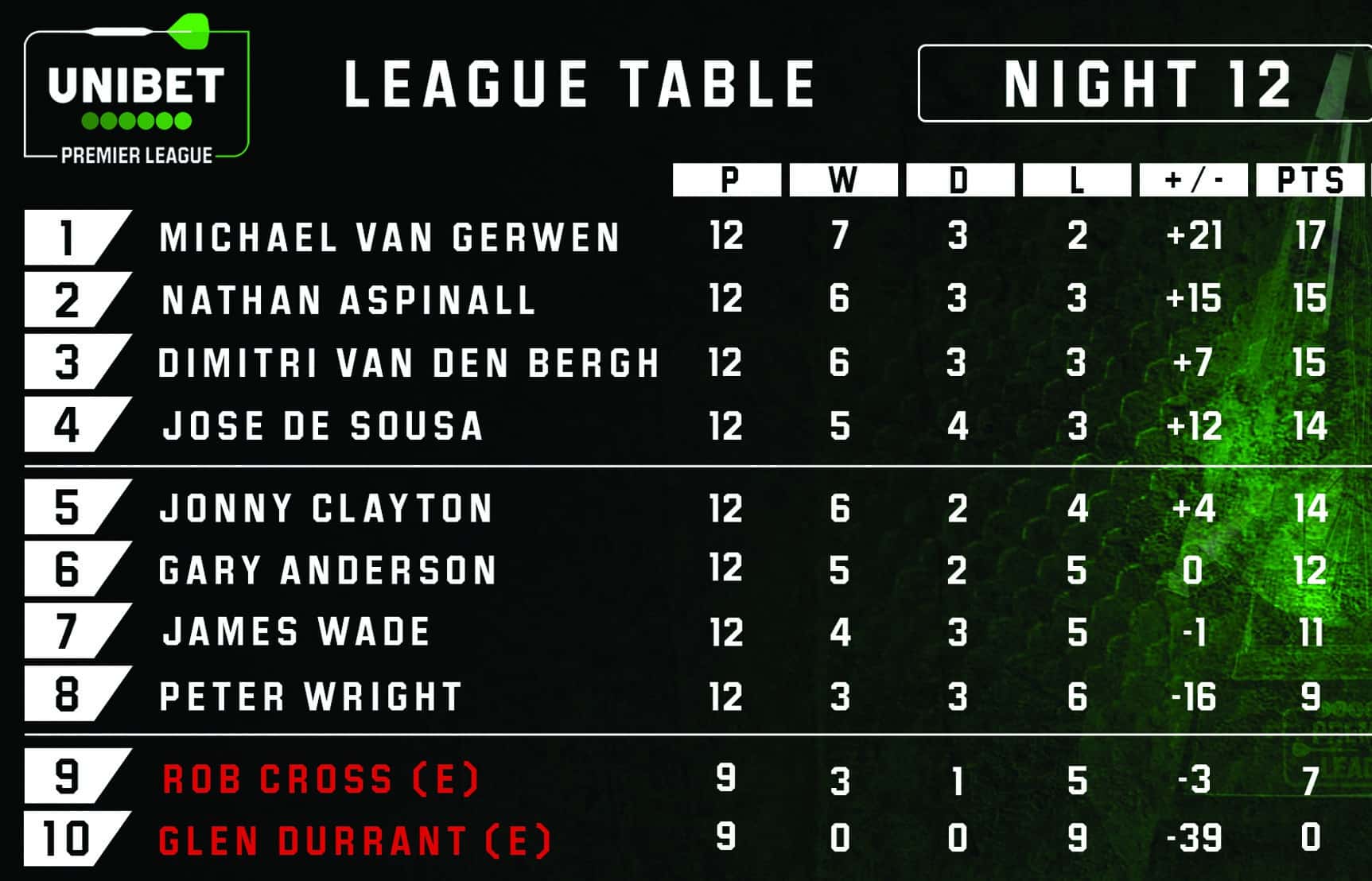