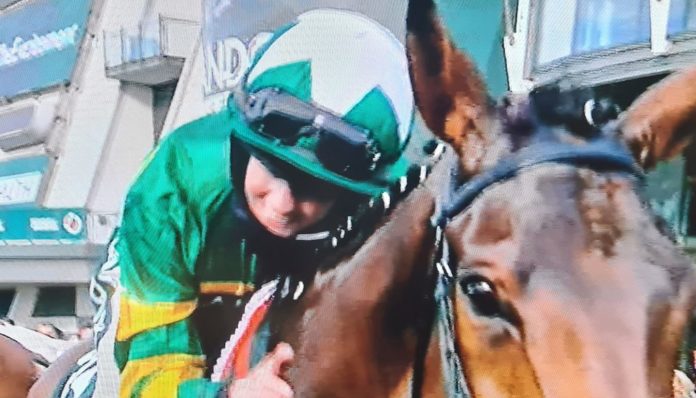 “I cannot believe it – he gave me an absolutely sensational spin – I’m so lucky to be riding him and I can’t believe we’ve just won the Grand National, it’s unbelievable,” said a jubilant Blackmore, who hit the world headlines after being the leading jockey of the Cheltenham Festival in March.

Blackmore’s win on board 11-1 winner Minella Times, saw her hold her head in her hands in disbelief in victory.

History maker Blackmore said: “It is just incredible. I can’t believe it and I’m speechless.

“I could never imagine winning the race. It’s a phenomenal race the Aintree Grand National.

“I think everyone thinks about winning the race. But it’s an unimaginable feeling and I can’t really put it into words.”

Trainer Henry de Bromhead said: “We are so lucky to have Rachael. She has such ability – and it’s entirely down to her.”

Blackmore who bided her time in the early stages of the marathon 4m 2f race said: “He was incredible and jumped beautifully and I was trying to wait for as long as I could. “When we jumped the last and I asked him for a bit he was there. I don’t feel male or female right now, I don’t even feel human! This is just unbelievable.”

“Its stuff you dream of,” said De Bromhead, winning the Aintree Grand National for the first time, after saddling winners of the Champion Hurdle, Champion Chase and Gold Cup at the Cheltenham Festival in March.