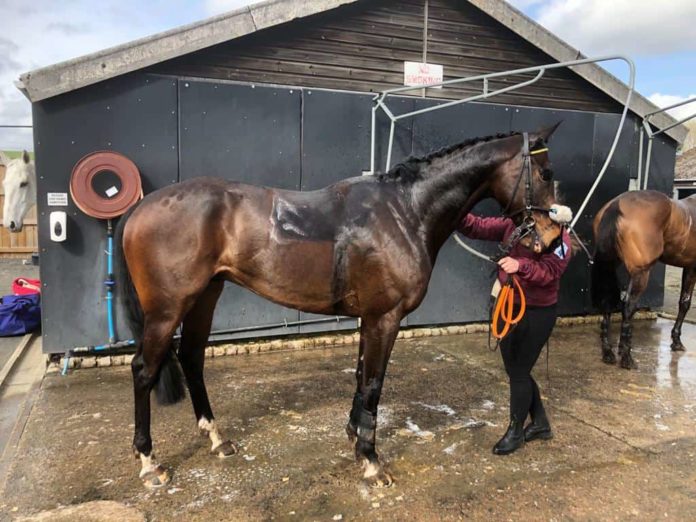 “It became the big disappointment of the weekend, pulling up three out – when he ought to have been just about winning,” said Nick. Nick added: “A post race scope found there to be a lot of mud in his trachea, which I very much hope was the reason for his performance.

“We will be thoroughly checking him out to ensure nothing else is bothering him.”

Benny’s Secret ran a solid race on his comeback to be third over an inadequate trip, said Nick: “The rain came down at Carlisle and conditions ended up testing.

“Up Helly Aa King ran a very brave race to finish third, giving a lot of weight away all round.  Manetti looked like playing a big part, until fading from two out. Better ground and 3 miles for him next

“Craiganboy started no problem, thank goodness, but was struck into from behind and pulled up, just as he was coming into the race. He has a nasty enough cut, but should be okay in a week or so.”

In the stayers chase Eagle Ridge ran a very solid race to finish fourth with conditions against him. Racing Pulse stumbled on landing after the first unseating his rider; and McGinty’s Dream didn’t appear very interested: “Maybe Hexham will switch him on again,” said Nick.

Dubai Days’ run at Musselburgh failed to land a blow, staying on into sixth: “It’s very tricky to win with a hold-up horse in a busy field round there – we should probably have waited for Kelso,” said Nick.

On a more positive note, Nick said: “Arnica ran a tremendous race, to finish third, as did Memors to finish second on debut. I’m delighted with both of them.”

With racing remaining behind closed doors, Nick said: “Obviously, without crowds the Go North weekend felt a little empty – but it is an excellent initiative and could make up into a really fun part of the racing schedule.

“I hope the BHA and the three racecourses involved will stick with it, as the concept hasn’t had a chance so far.” Photos: courtesy Nick Alexander.