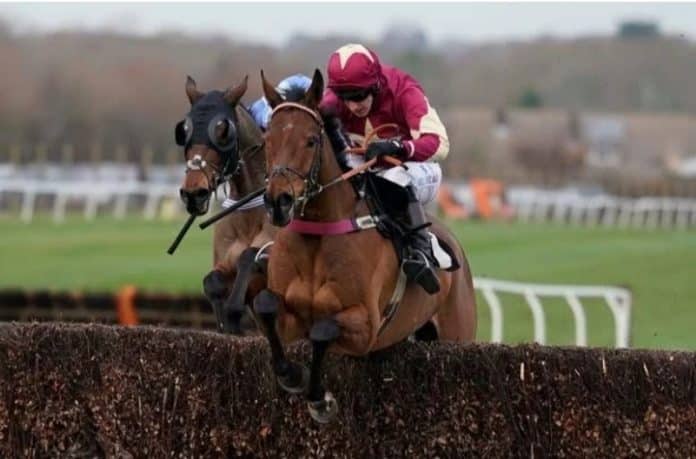 Nicky Martin trained nine-year-old The Two Amigos (3.35) has been knocking on the door to return to the winner’s enclosure and the Listed Midlands Grand National at Uttoxeter on Saturday offers an opportunity.

Martin, who only has ten horses in training at her stables set 1,300 feet above sea level, saddled The Two Amigos to third at Haydock Park in February, on the back of finishing second at Chepstow in January.

“This is an amazing place to train horses. I have a mile gallop and all that lovely moor. “The horses get exercises out there twice a week up the hills,” said Martin.

“The stable is 1,300ft above sea level, we don’t get bugs, the air is very healthy,” she enthused.

The Two Amigos under 11st 2lbs is ridden by Matt Griffiths in the 4m 2f Midlands Grand National priced at 12-1 selected each-way by fromthehorsesmouth.info along with David Pipe trained Ramses de Teillee 14-1 ridden by David Noonan.

“The Two Amigos is a tiny little horse – but very strong – and you have to kid him and let him think he’s taking you along all of the time.

“He’s got to think he’s running away with you, even on the gallops. He’s quite a little character.

“Matt rides out here twice a week, so he knows all of the horses inside out. He’s important to me.”

Martin purchased The Two Amigos at Punchestown after he had won an Irish point-to-point and had him with David Pipe, initially.

“He went the bumper/hurdles route, but that didn’t particularly work, so I brought him back home to point-to-point him and he went from strength to strength, winning five on the trot,” said Martin.

“We are on a 400-acre farm in the middle of nowhere, and the stables are attached to the Exmoor National Park, so the horses almost never see a road.

“They do a lot of work on the moor and some hunting, and they love it. They are very spoiled – that obviously suits The Two Amigos,” she added.

The post The Two Amigos knocking on door ahead of Uttoxeter Midlands Grand National appeared first on Horse Racing News and Tips.