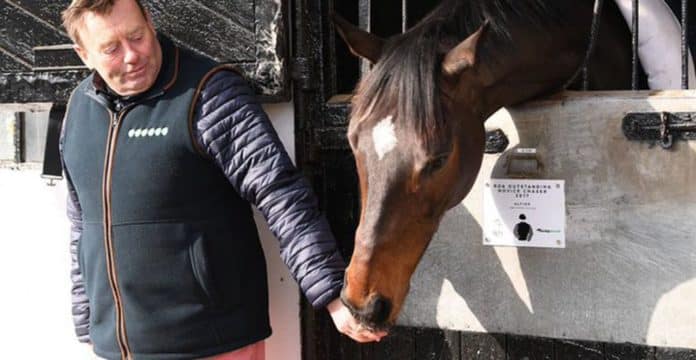 Altior has been withdrawn from the Queen Mother Champion Chase on day two at the Cheltenham Festival on Wednesday after trainer Nicky Henderson revealed the chaser had returned an unsatisfactory scope.

“We are very sorry that we have taken the difficult decision not to run Altior in the Champion Chase. He coughed after exercise which caused us to scope him and as a result of what we have seen it would not be sensible to run him.

“This is devastating for all of us, and Altior’s owners Pat and Christopher Pugh in particular, in that this is the second year running we have had to pull him out at the last minute,” said Henderson.

Annie Mc has been withdrawn for Friday’s Mrs Paddy Power Mares’ Chase. Simon Clare, representing owners Coral Champions Club, said: “Unfortunately Annie Mc has had a setback and will miss the Festival. Fortunately it’s not a serious issue and she could still run again this season. Cheltenham has just come a week too soon.

“We are naturally disappointed but she’s been an absolute star for us, and there will be more big days ahead for her.”

Cheltenham’s going has eased to soft, good to soft in places.

Both the Old Course, used on day one and two of the four day meeting, and the New Course which comes into use on Thursday and Friday, are likewise.

Clerk of the course Simon Claisse said: “We’ve gone soft, good to soft in places on all the courses.

“We’re not forecast particularly warm weather, although having said that, the forecast temperatures have gone up a little during the week to what they were earlier.

“We’ll just have to see how things pan out – regards watering – it’s too early to speculate.”