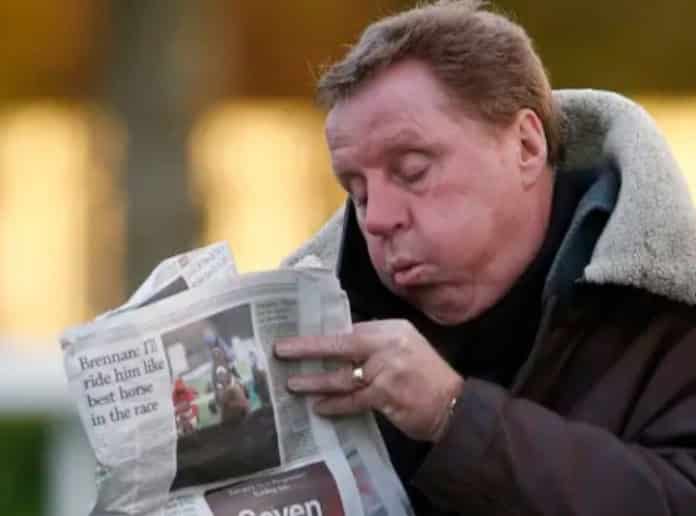 “I didn’t know the horse was going to be running,” said former Spurs and West Ham boss Redknapp, who will be working for Sky on Soccer Saturday at the weekend.

“They (Sky) asked me to do it about six weeks ago. I’m going to have to find a way for a break for five minutes – I’m not missing the race,” said Redknapp.

Shakem Up’Arry (14-1) who lines-up in Britain’s most valuable £125,000 Handicap Hurdle, returns to Newbury having finished second (twice) last season, when beaten by Mister Coffey and Shishkin, the latter the favourite for the Arkle at the Cheltenham Festival in March, who goes to post as favourite in the Betfair Hurdle.

During his time as Hammers gaffer, Redknapp said: “I used to have a guy stand behind me at West Ham when I was manager.

Redknapp, 73, whose Nan was a bookies runner in east London during his childhood, said: “I used to come home Saturday night after a game and all I could hear was this guy’s voice: ‘Shake ’em up ‘Arry!’ So when I got a horse I thought I’ve got to call him Shakem Up’Arry.”

Shakem Up’Arry finished second in a Grade One over 2m at Sandown Park on January 2 behind favourite Metier under 11st 7lbw ridden by Darryl Jacob.

Seven-year-old Shakem Up’Arry finished fourth of 14 at Haydock Park over 2m 3f and won at Fsos Las in 2020 over 2m.

“We love him. Ben (Pauling) likes him very much, but he’s come up against some good horses. He came up against Shishkin at Newbury,” said Redknapp.

“We’ve also come up against Mister Coffey, so he’s come up against some good ones. Ben says the horse is really well. We’ll need it, but we’ve got a 13lb swing at the weights, with the favourite Metier from Sandown, which should bring us closer together.”

*An inspection will take place on Friday morning due to freezing weather conditions ahead of Saturday’s meeting.