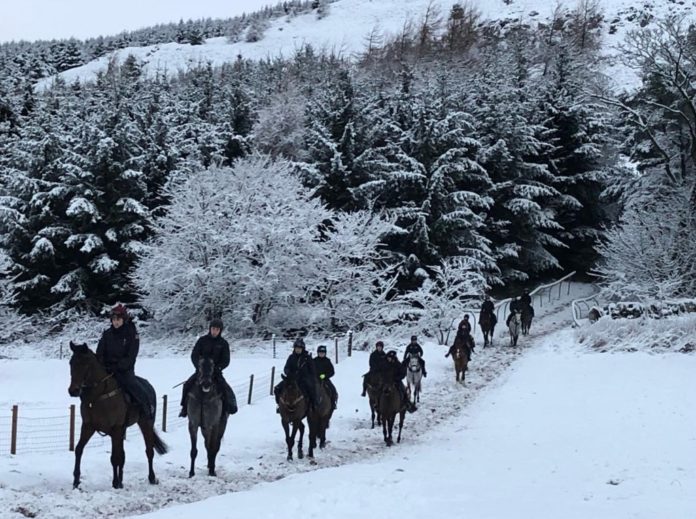 Quote: ‘Three inches of snow fell on a wintery day – and six inches at the top of the gallop. The gallops are in good working order and the horses appear fresh and well’.

Nick Alexander’s stables in Kinneston, Fife, depicted a ‘winter wonderland’ as snow fell across Britain that lead to postponed meetings, aided by flooding at some racecourses.

“Three inches of snow fell on a wintery day at the yard and six inches at the top of the gallop,” said Nick.

“The gallops are in good working order and the horses appear fresh and well,” said Nick.

“Broadway Joe is a Milan half brother to our seven-times winner Benny’s Secret. I’ve always been confident he had ability, but had been scratching around a bit for the key.

“So it was tremendous when it all came together, there should be plenty more to come from him,” said Nick.

“We’ve had runners declared, but with the weather and other issues presenting themselves, planning is hard.

“Weather presents its challenges here as well, every day is a battle, but we’ve kept all the gallops open so far,” said Nick.

“Young filly Cancan has a lovely pedigree and came over from France in November, she’s a tough mare but a bit too keen to get on with things,” said Nick.

“Upandatit made his stable debut at Musselburgh. His Irish point-to-point form has worked out very well, but we had a few hold-ups with him in the autumn.

“I’d have preferred to get him out on better ground at a galloping track, not an option at present, and we had to start somewhere. He has plenty of ability,” said Nick

“At Newcastle Penny River made a thoroughly satisfactory racecourse debut, but Dubai Days chances were undone by a falsely run race,” said Nick.