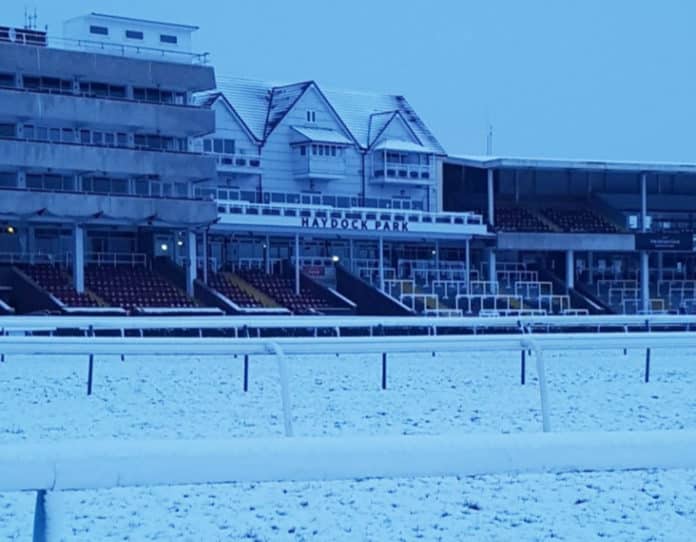 Haydock Park’s meeting December 30 has been called off – 48 hours in advance following heavy rain – and four-inches of snow falling!

“Unfortunately due to four inches of snow overnight and substantial rain on Boxing Day racing has been abandoned on December 30,” said a spokesperson from Haydock Park.

Following the lifting of behind closed doors protocols at race meetings, structured under Tier-levels, Haydock Park was scheduled to welcome up to 2,000 spectators, being in Tier 2.

The Haydock Park cancellation comes on the back of Chepstow’s Welsh Grand National fixture on December 27 and the abandonment of Fontwell Park and Leicester on December 28.

The meeting at Newbury on December 29 has seen covers placed in situ at the take-off and landing areas as a weather precaution.

A spokesperson from Newbury reports they are confident the meeting, featuring the Grade 1 MansionBet Challow Novices’ Hurdle, will go ahead.

Cheltenham’s going is heavy, ahead of the New Year’s Day meeting, after 100mm of rainfall since the previous meeting on December 12. Rain is forecast, with drier conditions later.

The post Haydock Park abandoned due to four inches of snow and rain appeared first on Horse Racing News and Tips.