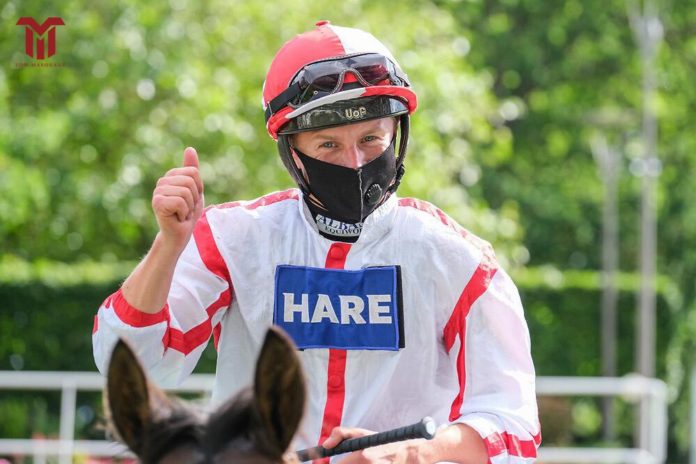 Tom Marquand, one of British racing’s rising stars, has been ‘jocked-off’ English King in the Investec 2000 Derby at Epsom next month – with Frankie Dettori in the saddle.

Marquand, 22, who rode Who Dare Wins at Royal Ascot on Saturday, rode English King in its last two outings.

Marquand was on board three year old English King at Lingfield Park on June 5 in a Derby trial and in November at Newcastle. Kieran Shoemark rode the horse when seventh at Newmarket in October.

Following the win at Lingfield Park earlier this month English King’s odds have been slashed from 66-1 to an eye-watering 7-2 after beating Berkshire Rocco by 2 3/4 lengths.

Trainer Ed Walker announced Italian veteran Dettori, 49, had been booked to ride the favourite, English King, in the Derby at Epsom on July 4.

“Frankie has a wealth of big-race experience and raises his game to stratospheric heights for the big races – we feel very privileged to have him on board,” said Walker.

Dettori, champion jockey at the behind closed doors five day meeting at Royal Ascot last week, is out to add to his tally of Derby wins on board 7-2 favourite English King.

Dettori won the Derby on Authorized in 2007 and when riding Golden Horn to victory in 2015.

As with all race meetings and sports in general, the Derby, Epsom meeting will be behind closed doors due to the coronavirus health and safety guidelines in place.

The re-scheduled Derby takes place in July, after it was postponed on June 6. Now the Derby and The Oaks will be run at Epsom on July 4.