A question mark hangs over the prediction – made in 1981 – by author Dean Koontz that a Coronavirus outbreak would take place during 2019-20.

In his book “The Eyes of Darkness” Koontz describes the coronavirus – mentioning a virus called “Wuhan-400”.

Koontz wrote about a fictional virus and its name “Wuhan-400” refers the Chinese city in which the 2019 Coronavirus outbreak (COVID-19) started.

However, the illness in his book doesn’t share any other traits with COVID-19. Koontz described “Wuhan-400” as “China’s most important and dangerous: new biological weapon in a decade”. He also wrote it was developed by labs outside of the city of Wuhan. 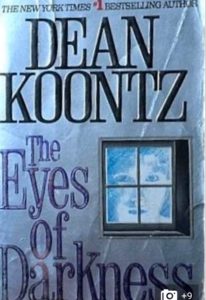 No proof has materialised that the new coronavirus was created in a laboratory but is believed to have originated in 2019 – in a food market in Wuhan – illegally selling wildlife.

Health experts have said it could originate in bats – passed to humans, possibly via another species. Snakes have also been flagged up as the cause.

The symptoms and behaviour of Koontz’s “Wuhan-400” are very different to COVID-19. In the novel, the virus has an incubation period of “only four hours”. COVID-19’s incubation period is between 1-14 days.  According to the World Health Organisation the most common incubation time is approximately five days.

Koontz describes “Wuhan-400” as a disease with a kill-rate of a 100%. Once infected, no one lives more than 24 hours. Most die in twelve, he wrote.

COVID-19’s death rate, according to the WHO, the case-fatality rate is between 2% and 4% in Wuhan and 0.7% outside Wuhan.

The symptoms described by Koontz are different to COVID-19. In his novel, “Wuhan-400” causes the secretion of a “toxin that literally eats away brain tissue” causing loss of control of bodily function. “The victim simply ceases to have a pulse, functioning organs, or any urge to breathe”, writes Koontz. 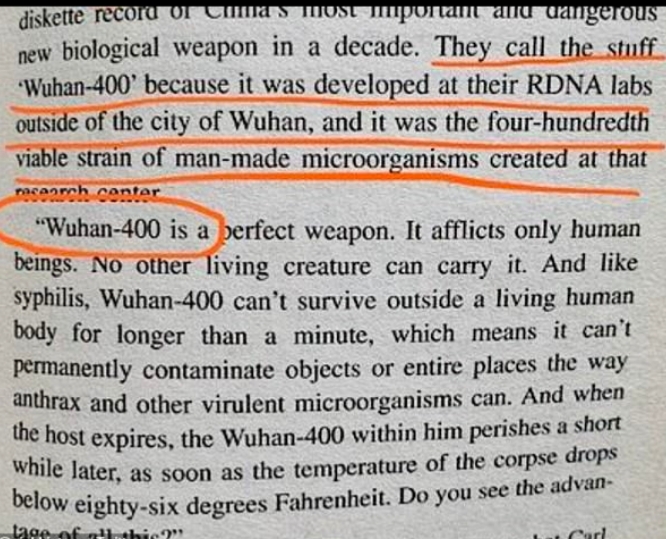 COVID-19 infections have a wide range of symptoms, including fever, coughing, shortness of breath and breathing difficulties.

In the first edition of “The Eyes of Darkness” in 1981, the fictional virus was not named after the Chinese city, but after a Russian locality named “Gorki” (Gorki-400). In the original version of the novel, the virus was developed outside of “Gorki” and it was meant to be the “Soviet’s most important, dangerous new biological weapon in the decade”.

Dean Koontz did write about a fictional virus called “Wuhan-400” in the 1989 re-release of his 1981 novel “The Eyes of Darkness”, but symptoms and effects of the disease do not match the official description of COVID-19.