Turning the clock back I have returned to Royal Lytham, a drive away, from my home city Preston, to reminisce on golf’s most beloved son, Seve Ballesteros.

Seve, who completed a second of four courses of chemotherapy at Madrid’s La Paz Hospital in February 2009, won his maiden Major triumph at Royal Lytham in 1979, with his second round 65 having put him into contention for glory.

Seve, aged 22, made four birdies in the last five holes – risking all – as he played his round on the greens. 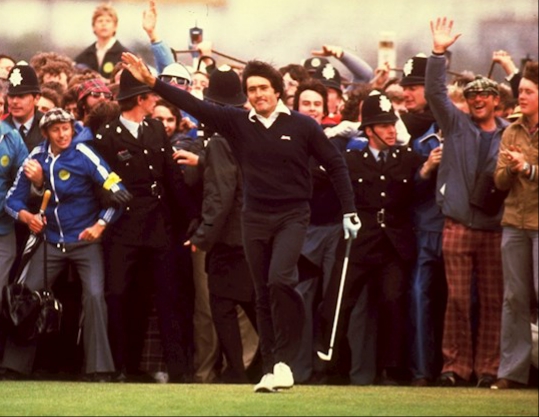 The blustery, gale force, wind-swept conditions, blowing off the Irish Sea unfazed Seve, having practised as a boy on the hills and beaches, surrounded by sand dunes in and around the family home in Pedrena.

Former world number one, winner of 90 Major international tournaments, including five Major championships, Seve was famed for playing with no fear.

At the 16th hole at Royal Lytham, in the final round, Seve encapsulated his first Major. He had only hit 9 of 72 fairways across his four rounds with his driver.

At the 16th tee – a blind shot – Seve, having a two shot lead, hit his drive, which veered off to the right – ending up in a temporary car park.

A huge crowd flocked to find Seve’s ball, with the man himself finding it underneath the front bumper of a blue Sedan car!

Seve was granted a free drop away from the cars, in an area with flattened rough – due to it doubling-up as a car park.

With a good lie guaranteed, Seve produced a lovely chip to ten feet, and drained the putt for a birdie.

Hale Irwin, the third round leader, waved the ‘white flag’ up the last, as Seve went on to win his first ever Major title.  Irwin later donned Seve as the ‘car park’ champion!

Seve, winner of five Major championships during 1979-88, the Open three times and Masters, twice, returned to Royal Lytham in 1988, to win again.

Seve, who retired in 2007, embedded in the World Golf Hall of Fame, winner of a record 50 European Tour titles, affectionately named his casa in Spain ‘Royal Lytham’.

At the prizegiving ceremony, Seve, diagnosed with a malignant brain tumour in 2008, who died of brain  cancer in 2011, aged 54, said: “I play good from the rough. I have plenty of practice!”.

*Part 2 of Seve Ballesteros next week.

Gmail collapses with thousands of users going hours without email

How to Entertain Yourself Online