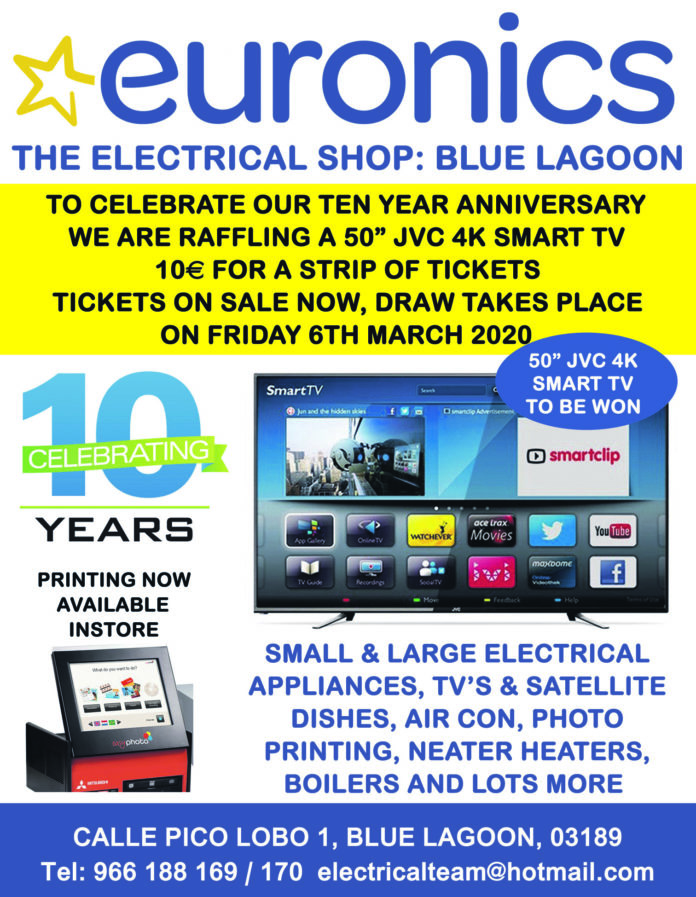 El Capitan continue their unbeaten run with a straightforward victory over the Legends. The Hi Life boys found their feet after the break with three consecutive singles wins, but the damage had already been done, the league leaders 6-0 up at the interval.

Nigel Justice found his usual form early on with 140, 100 and the first double on tops for the first. Shane Denness made it 2 on D12, following a ton from Ed Klimonis. Denness, Justice and Klimonis were the chosen three in the third. Justice completed the 701 on D20 after throwing a maximum and a ton.

Legends ton scorers were Roger Phipps and John Crabbe. Vycka Bobinas made it four on a dodgy D1, Justice added a 135 to his already impressive ton tally, plus a closing D4. Geno Rouzee offered 100, partner Phipps 2×80+ not enough to prevent 0-5. lt was a tighter affair in the sixth, husband and wife duo of Sandra and John Crabbe not quite able to reduce the deficit against Denness and Ginge Lewis, the latter making it 0-6 on D7. 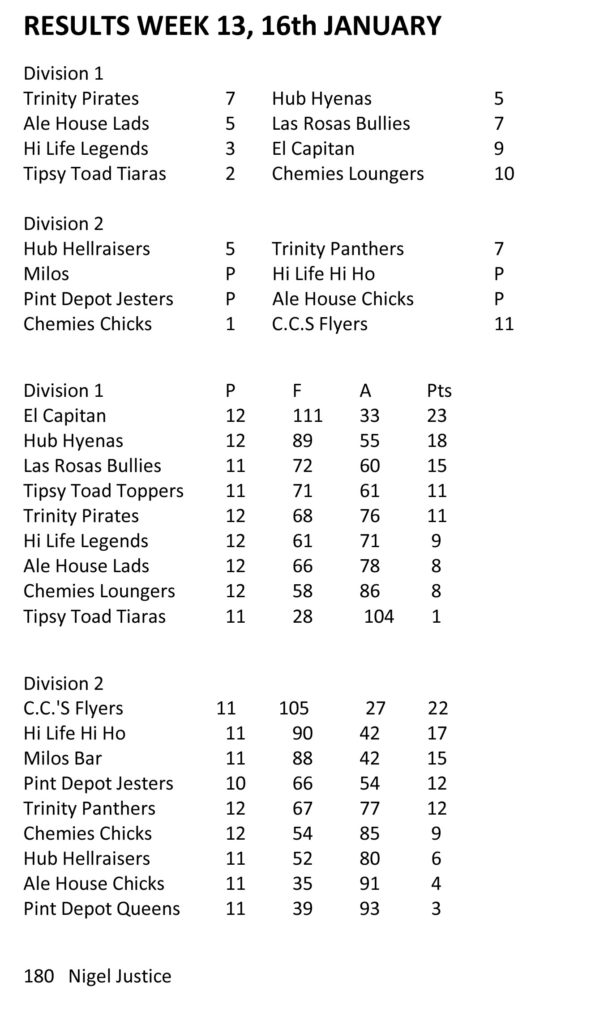 Bobinas went the same way, taking out D16, host Rouzee scoring consistently and closing on D20 and D5. A real Legend comeback. Les Adams figured next for the hosts looking likely to make it four.

An impressive 3×100, 140 and 4×80+ scores plus D10 first leg looked ominous for visitor Denness, however a D1 to level, then an excellent scoring third leg, closing out on D8 gave the Caps their seventh leg and points. Klimonis senior 5×100 made short work of a below par Sue Christie using D4 and D7 for the Caps eighth.

Phipps gave Justice a run for his money, but the experienced former P.D.C. star 1×100, 2×140, making 8 tons for the night ( inc. a 180 ) comfortably found his way to D12 and D16 to conclude the evening. Barry Shinglar and Nigel Justice were awarded MOTM. 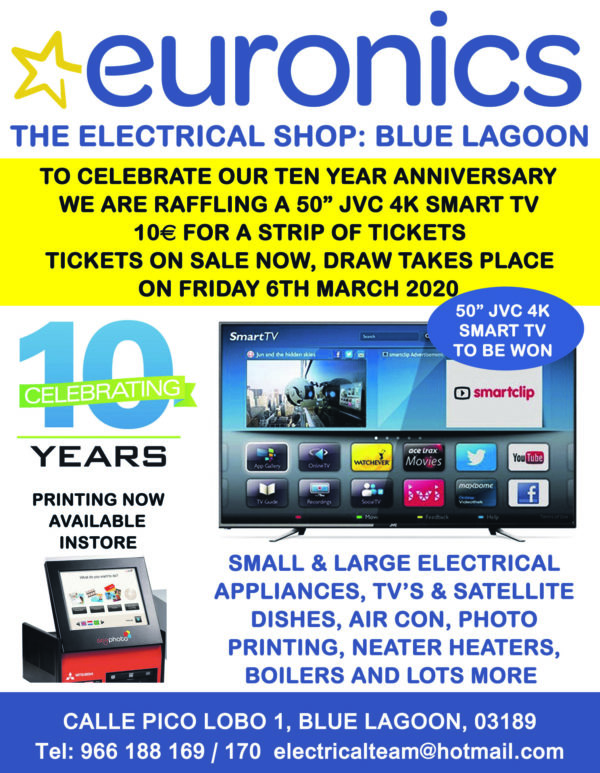 Second placed Hub Hyenas always enjoy a close encounter and this was no exception, with the Trinity Pirates, usually coming out on top.Just! Not this time, a tremendous performance, particularly in the singles, gave the Pirates their first victory over the Hub.

Joe Miller hit the required 18 points in the first, Bob Taylor did all the work with 126, 100. Paul Cripwell levelled on D11. Martin Hastings contributing 121. Sid Cross made it 2-1 for the hosts on D15, John Eyre recording a ton and Taylor yet again finding trebles easy to come by with 116, 140.

The Pirates extended their lead through Yvonne Rouffignac on D5, Eyre recording a 140. Two more 140’s from Miller and Paul Durrant set up the latter to hit D8 for 3-2. A lone Cross ton in the sixth was the highlight in the concluding pairs, Alex Nikolov making it all square on D2.

Brian Nash put up a good show against the in form Taylor who made it seven tons for himself on the night completing the seventh match on D6, D20. Hastings made it four apiece against Hyenas skipper Simon Williams.

Cripwell really found his scoring boots hitting 3×100, 125 against Durrant 3×100 and 3×90+. The Pirate going one up on D16, Durrant making it 1-1 on a 68 out. Cripwell had the edge in the third to go ahead by one. Another ding dong followed, Cross versus Nikolov, they shared 8 tons, 5 to Cross, including a 140, Nikolov hitting D20, but Trinitys Cross closing out on D4 for the sixth and a guaranteed point.

With the Pirates on a roll , it was down to Miller to save the day. 3×100 and a D19 looked good enough, but Ron Chadwick had other ideas hitting the bull to level and 2×100, 129 and a third leg D20 for a deserved victory and both points. Eyre completed the match, 121, 135 and a D20 second leg victory over Rouffignac, was the Hubs consolation.

Compliments to the Pirates result sheet recorder who detailed numbers perfectly and legibly. MOTM were Cross and Taylor.

The hellraising Hub girls just failed to get into the points this week in a close encounter with the Panthers. At five each the match looked poised for at least a draw, Lesley Dolling recording 100 and a 95 in the penultimate leg against the formidable Gilly Kirby. lt was however Kirby finding D4 first to take the eleventh.

David Minto requiring 40 hit D1 with his first arrow and D19 with the second to take the twelth match and points.Earlier Sue Spiers recorded the opening double for the hosts, Alan Sullivan D9, Harvey Lane D1, taking the remaining triples for the Panthers. Spiers D13 making it two all.

Lane nudged the visitors ahead with his second double of the night, D19. Gill McCarthy D3, making it all to play for after the McGlynn Michelin style bistro break.

Lane made it three winning doubles in the first of six singles, Spiers equalling the feat with her third in the eighth leg. Liz Minto enjoyed an outstanding ninth leg with 111, 114 and the vital double for a narrow one leg advantage.

The experienced Ann Taylor, the other half of Bob, needed a win to keep the Hub in the race.

A couple of tons, followed by S19, S16, D8 earned her the MOTM for 5-5. The remaining two went to the visitors for the win and both points. David Minto was MOTM.

Featured ” Spotlight “this week is none other than our Euronics league sponsor Debbie Wright. Boss of the Blue Lagoon electrical appliance showroom, for the past ten years, Debs slings her arrows down at the Pint Depot, along with the rest of the Queens.

Prior to her 16 years in Spain, the Aldershot lass spent a number of years in the United States as a nanny, before returning to the U.K. to run a succession of pubs ( 8 in all ) finally ending up in Alderly Edge, Cheshire.

Darts apart,  Debs enjoys nothing better than eating out with husband of 7 years Dave, sipping a wine with a gin and tonic chaser. Dining out is prefered as the new oven is still in it’s delivery packing. The couples passion is Formula 1 racing, having attended numerous Grand Prix, including Hungary, Russia, Abu Dhabi, UK and of course Spain.

Debs mobile is full of pics of her chatting with favourite driver Fernando Alonso, but more recently Carlos Sainz, whilst Dave prefers the company of Lewis Hamilton.

Musically, Debs preference is the old rocker himself Brucie Springsteen and owns up to seeing him live at least 10 times. Close friend and fellow Queen Lorraine Cox even arranged for the rocker to share a bed with the besotted Miss Mackleston on her “Hen Night”.

Alas for the entrepreneur it was a Sprinsteen masked Mannekin. Ask to see the photo. When on rare occasions she relaxes, her time is spent  doing ” Jig Saws ” 100’s of them and more recently ” Was Gij’s “. Don’t ask for an explanation, make an appointment with the Queen.

Coming up this March, is the Euronics showroom 10th anniversary and to commemorate the occasion a 50 inch J.V.C. 4k tv is up for grabs. Pop into the showroom for details.