Hope all enjoyed an ideal Christmas, Jill and l certainly did joining 15,000 merrymakers on La Zenia beach welcoming the 25th and then onto the excellent Argentinian establishment of Che!!! on the Plaza for a traditional lunch and jolly up.

Thoroughly recommended! Well it’s back to normal now after our customary break, many of us already rueing our well meaning but broken New Years resolutions. lt was an opportunity too good to miss when old pal Rod Harrington accepted my invitation to have a beer at the Hub and view our efforts on the dartboard.

They may not have reached the heights of the professional scene, but the the former world no.1, Masters and Matchplay champ, was happy to pose for the photo featured. Now a commentator and pundit for Sky, Harrington intends spending more time here with wife Dawn in their newly acquired local property. 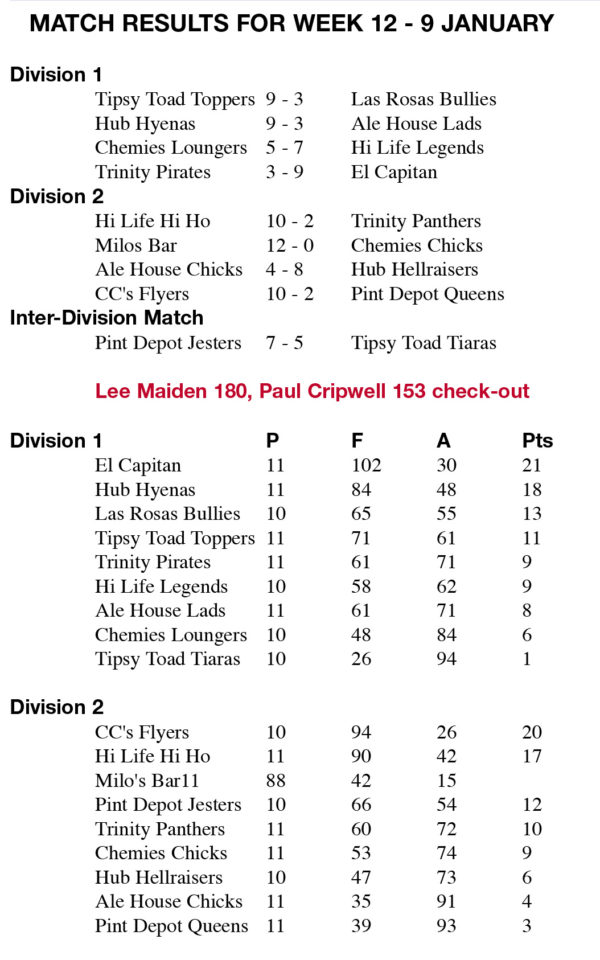 The Pirates welcomed league leaders El Capitan to the Trinity bar this week and despite a heavy defeat, now boast the leagues highest checkout to date, courtesy of MOTM Paul Cripwell. Requiring 153, the Pirate found T20, T19, D18, for a magnificent gameshot. Unfortunately for him, his opponent, the likeable Lithuanian Eddie Klimonis banged in 129, 100 and two doubles in the best of three, for a narrow victory.

Both players figured in the triples, Klimonis opening for El Cap on D4, Cripwell levelling on D16. The next three legs went to the visitors, Vycha Bobinas finding D5, in the third triple and D8 in his paires. Nigel Justice gave El Cap their fifth on D8, he and Arold Klimonis both nailing three figure scores. Yvonne Roufignac made it 2-4 at the break on D16. Martin Hastings closed the gap further defeating skipper Den Hall, the match looking very promising indeed for the Pirates.

Dreams they were as the current champs reeled off the next five for victory. Outstanding single was the Jeff Ward, Arold Klimonis encounter, Ward scoring a 137 and then a 90 out ( T18, D18 ) rattling Klimonis into 3×100, 140 and two leg winning doubles D8, D16. Nigel Justice was El Caps MOTM.

Trinitys other side the Panthers, suffered a similar defeat on the road to Hi Life and the Hi Ho’s who opened their account with three straight triples, via Kieran Fletcher D20 and Paul Lock D 8, D1. Sonya Cooper made it 4-0 on S14, S20, D16, before Michelle Lane pulled one back on D17. Charlie Pritchett gave the hosts a 5-1 advantage at the break on D15.Jackie Sullivan was the sole Panthers victor in the singles, overcoming Fletcher on D1.

Nick Spicer made a timely return to old haunts, replacing John Eyre who was on birthday duties, his own. Congratulations John, see you next week. Ben Lane gave the Lads an early advantage on D12, only for the prodigal Spicer to take out D16, then D8, plus a couple of tons for 2-1. Dario Sierras 2×100, 140 insufficient for any success. Lanes’ 2×100 went the same way in the first pair, Alex Nikolov finishing on D12.

Durrant overcame a below par Mallinson for both points and the match. The draw didn’t favour the visitors, the match now beyond them with their two best player yet to feature. They were next, Sierra and Havelock performing as expected, both winning 2-0, tons galore, the latter outing on 90.

Taylor and Joe Miller completed the match without reply. No problem in determining MOTM Sierra and Spicer.

With about two thirds of the season over this match was all about the battle for third place in the league. Neither side was at full strength – especially the Bullies – but it was still a competitive match played in a very friendly spirit.

The evening started with the three trebles rattled off in quick time with some good scoring and even better finishing. Before we knew it The Toppers were 3 up. Not a great deal to report in these legs but Graham Solomons started the night with a ton and never looked back.

The Bullies had to wait till the first of the doubles for their opening win when Jem Gledhill and Terry Brindley took out Hugh Galloway and Baz Schofield – despite Baz’s 122 – ‘here we go’ – again!.

The highlight of the night came in the second singles match where Lee Maiden was playing Alan Charmian. Already 1 leg up in very quick time – Lee decided he wasn’t hanging around. The second leg began with 180, the next nine darts took him to 94, and T18, D20 finished the job in 14 darts. It also secured the win for the Toppers.

There were wins at the end for landlord Andy Gildea and Hugh Galloway. Adrian Buitekaht and Jem Gledhill gave the Bullies some solace by taking the last two legs.

The Tiaras were struggling to pull a full team together this week as the list of injuries and ailments lengthened.  Its getting more like a script for Casualty!  Sharon Marshall managed a finish with her recently broken, and still decidedly dodgy, right arm, Pat Schofield managed a finish too despite an ear infection and Captain Simone de Lacy pulled off 3 finishes despite tendonitis in the elbow from walking her over-enthusiastic dog!

High scores for the ladies included a 114 from Lisa (broken foot) Ivill, Pat’s 111 and de Lacy’s 127. A shout out for Rhianna Marshall in her first full match for the Tiaras who threw some good darts and narrowly missed a few finishes too.  The Jesters showed form in Graham Cahill and Dave Wrights regular bashing of the treble 20, Jamie Ferguson’s 140 and MOTM Stewart Taylor’s match-clinching D8-D8 check-out in the last leg.  7 – 5 to the Jesters.

Who’d believe it Jem Gledhil, he of Las Rosas Bullies, l was a ” Mod ” during his time in the sixties.

He still owns a Lambretta SX 200 (what a machine) in maroon and white side panels. He declined to admit still owning his “Hush Puppies” and Parka. 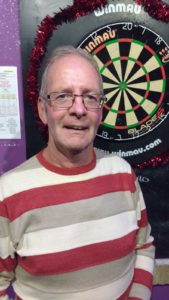 Wife Pat of forty seven years, they met when teenagers, was also a Mohair wearing Mod. Son Andrew, visits regularly from the UK, along with wife Claire and the two grandchildren. Originally from Chesterfield, the city with the wonky church spire, Jem ( actually Jeremy ) worked in the local colliery, but soon started his own business in waste disposal. Later sold, he set his sights on the building industry via concrete delivery contracts before retiring.

During his busy career he even had time to build his own bungalow from start to finish, to include bricklaying, carpentry, plumbing and electrical work, obviously a useful bloke to have around.

Due a rest, Spain beckoned, but not before numerous visits to N. Africa. Now taking things a little easier, Jem regularly enjoys the virtues of Petanque and Euronics Thursday darts. Having only thrown his arrows for two years, his skills are pretty evident, but alas he’s thirty years too late to take on Taylor or favourite player the Mohican Peter Wright.

An expert on Clint Eastwood films, the ” Mod ” prefers an old fashioned Rum and Black, whilst watching Corrie with other half Pat.