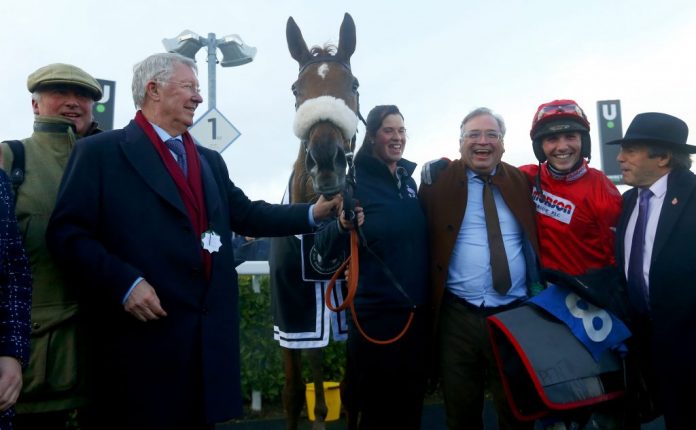 GIVE Me A Copper – selected by fromthehorsesmouth.tips – obliged when landing the Badger Beers Silver Trophy at a chilly Wincanton.

Give Me A Copper, part-owned by ex-Manchester United manager Sir Alex Ferguson, who was at the races, completed a fromthehorsesmouth.tips Wincanton 17-1 treble.

“It was nice for Give Me A Copper to win – he produced at just the right time. It was exciting at the end, you couldn’t beat it,” said Ferguson.

“I was a little bit worried, fitness wise, but he did well,” said jockey Cobden.

“The key is being fresh and he showed the promise he had shown, after problems last year,” said Nicholls.

“He has entries in the Ayr and Aintree Grand Nationals,” said Nicholls, who could run Give Me A Copper in December.

“I was delighted with him. He’s a very good, tough horse. He came out on top. I knew that I had to dig in,” said Jacob.

“It was a relief. I didn’t think he was ready, really. We only recently started serious work. I think there is a lot to come,” said Henderson.

Reserve Tank (4-5) trained by Colin Tizzard and ridden by Robbie Power selected by fromthehorsesmouth.tips returned to the winner’s enclosure.

“A great horse – gutsy – in what was a real battle. It’s great to be back in the saddle this time of the year ” said Nico De Boinville, jockey on Top Notch, getting the upper hand against Roksana at Aintree.

The post COP FOR THAT! appeared first on Horse Racing News and Tips.