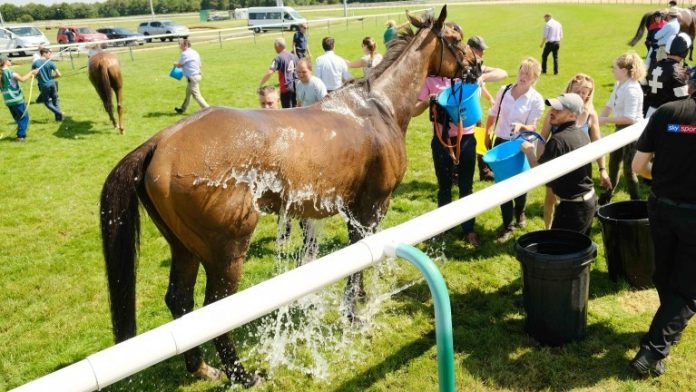 SOUTHWELL’S race meeting on Thursday was abandoned – with two races remaining – due to record-breaking temperatures.

Racing was affecting horses in the sweltering 35 degrees heatwave. Two horses were treated for post race heat stress, and a horse was withdrawn for overheating – after showing signs of colic.

Flat racing at Sandown was completed – in  36 degrees – and at Yarmouth, on a day record UK temperature for July of 38.1 degrees were recorded in Cambridgeshire.

“They’re hot weather animals – and (most of the time) I think they love it,” reasoned Johnston, at Sandown.

“I’ve raced in 44 degrees in Caulfield. There’s no issue – as far as I’m concerned,” said Oisin Murphy, in the race for the Flat jockeys title.

With regards to the jumps meeting at Southwell, stand-in clerk Charlie Moore said: “We knew it would be hot and made the decision to bring the start of racing forward (11.55am).

“When we started it was around 29-30 degrees – and everyone was happy. After the fifth race it was 35 degrees and thought it right to hold a Stewards’ inquiry – about whether racing should continue.

“We agreed that we had reached a point it wasn’t wise to continue – common sense prevailed – and everyone at the course saluted the efforts made by Southwell.”

Southwell clerk Paul Barker was busy on equine welfare, with Moore brought in to assist.

The BHA revealed the decision to call off the last two races at Southwell was taken by officials at the course.

“It’s vital that extra measures are taken to care for all horses in a heatwave. And crucial racecourses take steps to protect welfare, in response to the extreme temperatures,” said an RSPCA spokesperson.

Horseracing in France faced hotter conditions, than those in Britain, with temperatures hitting 42 degrees in Paris.