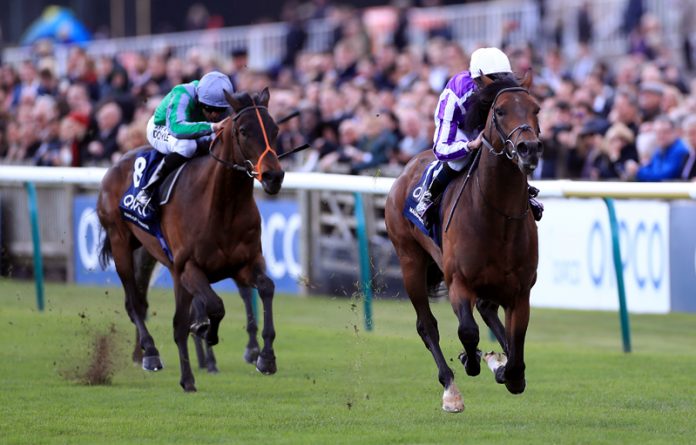 MAGNA Grecia could be too hot for Too Darn Hot in today’s (Saturday May 25) showdown in the Irish 2000 Guineas at The Curragh.

Too Darn Hot, trained by John Gosden, returns to the turf in the wake of setbacks: “Too Darn Hot’s programme was turned upside down in the spring,” rued Gosden.

Too Darn Hot missed the Greenham and the Guineas, and Gosden said: “When he went to the Dante, he was 85 per cent – and ran a good race.”

It was deemed the distance was too far for Too Darn Hot, and Gosden said ahead of today’s race: “It was not my intention to go to Ireland.”

Ahead of the showdown with a plethora of top class horses, Gosden said: “It looks a really smart race – let’s hope that the best horse wins – it will be very exciting.”

Challengers to both Magna Grecia and Too Darn Hot includes Skardu, who ran a well from an unfavoured draw in the Guineas.

Magna Grecia is aiming to complete a double last achieved by the O’Brien-trained Churchill in 2017.

Magna Grecia, one of O’Brien’s eight runners, ridden by Ryan Moore, winner of a Doncaster Group 1 in his last 2018 outing, was impressive in bolting up in the 2,000 Guineas at Newmarket.

Too Darn Hot, ridden by Frankie Dettori, lost his unbeaten record in the Dante at York. A Group 1 winner as a juvenile. Exciting prospect over 1 mile.

Skardu, trained by Willie Haggas and ridden by James Doyle, is a Group 3 winner at Newmarket. Finished third of 19 runners in the 2,000 Guineas.

Phoenix Of Spain, trained by Charlie Hills and ridden by Jamie Spencer, a Group 3 winner, noted at Doncaster in Group 1 race in October, when beaten by Magna Grecia.

Underlying Too Darn Hot’s concerns, Gosden said: “I would have preferred a much more straightforward preparation.

“It is the last chance to get a Classic – let’s hope I’m not asking him too difficult a question.”

The post Magna Grecia too hot for Gosden? appeared first on Horse Racing Tips and News.