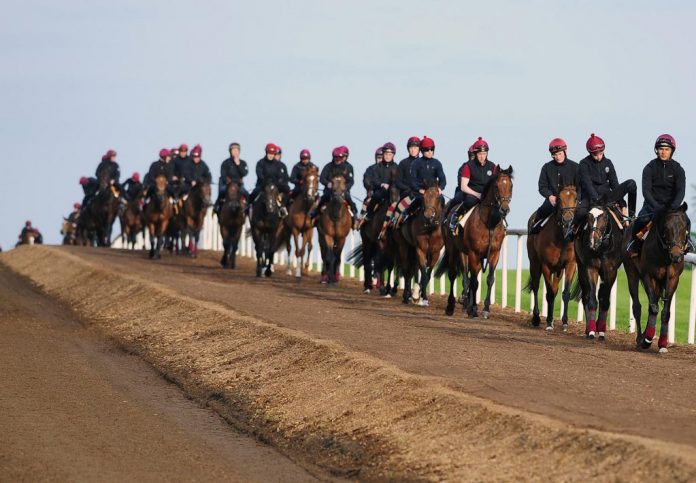 Battaash, Kachy and Mabs Cross feature among the 21 entries for the 2019 £100,000 Armstrong Aggregates Temple Stakes on Saturday May 25.

Lambourn-trained entry Battaash was second in the G1 King’s Stand Stakes at Royal Ascot and enjoy a second success in the G2 King George Stakes at Glorious Goodwood, both also over the minimum distance of five furlongs.

Leading entry Kachy has carried all before him on the All-Weather over the winter and landed the valuable All-Weather Sprint Championship at Lingfield Park on Good Friday, April 19.

Mabs Cross followed up her fourth in the 2018 Armstrong Aggregates Temple Stakes, as she took third in the G1 King’s Stand Stakes at Royal Ascot and was beaten just a nose in the G1 Nunthorpe Stakes at York by Alpha Delphini.

She had Battaash in fourth and Alpha Delphini back in 11th. Not surprisingly, Mabs Cross was named champion European sprinter at the 2018 Cartier Racing Awards.

Mabs Cross made her seasonal reappearance at Newmarket on May 4, when she defied a 4lb penalty to land the five-furlong G3 Palace House Stakes for the second year in succession.

Trainer Michael Dods has also made an entry for Intense Romance, another five-year-old mare who won a handicap over the course and distance last year before going on to Listed wins at Ayr and Ascot.

“We have entered Mabs Cross for the Armstrong Aggregates Temple Stakes,” said Dods.

“Royal Ascot is the priority (G1 King’s Stand Stakes, June 18), but the Temple Stakes is sponsored by the Armstrong Group.

“As long as we feel she is A1, there is every possibility she could go to Haydock.

She has come out of Newmarket very well.

“She is a tough horse and takes her racing very well. We are very pleased with her.

Her priorities this year will again be Royal Ascot, York and France, but if she is a ready and right, we will look at having a go at the Temple.

“Intense Romance is a proper heavy ground horse. For us to think of Haydock for her, we would need to see proper soft ground,” said Dods

There is strong overseas representation in the 2019 Armstrong Aggregates Temple Stakes, with seven entries hailing from Ireland and one from France.

The other Irish-trained entry is Son Of Rest who was runner-up in the G1 Flying Five Stakes at the Curragh last year before going on to dead-heat in the Ayr Gold Cup Heritage Handicap.

The possible French-trained representative is Bakoel Koffie, a Listed winner on his latest start at Fontainebleau in March.

Newmarket handler Robert Cowell is renowned for his handling of sprinters and has entered Pocket Dynamo, runner-up in last season’s G2 Norfolk Stakes at Royal Ascot.

The five-day confirmation stage is noon on Monday, May 20. The Armstrong Aggregates Temple Stakes, part of British Champions Series.

The main supporting race is the £90,000 G2 Armstrong Aggregates Sandy Lane Stakes, staged over six furlongs for three-year-olds and a leading trial for the G1 Commonwealth Cup at Royal Ascot.