Reporter Andrew Atkinson who has visited Cuba looks at renowned Cuban dictator Fidel Castro’s death. Castro died, aged 90, on November 25, 2016. His brother, President Raul Castro, who succeeded Fidel in 2008, said: “The commander in chief of the Cuban revolution has died.” Castro was cremated on November 26, 2016.

As a reporter of almost 40 years I am well aware that there are always two sides to a story – and that is the case following the death of Cuban dictator Fidel Castro.

Castro is hailed as both a hero and a dictator. Which side of the coin will the world leaders look upon, along with Cubans, many who have lived under limited movement from the country for over 50 years?

Fidel Castro’s sister Juanita Castro, who will not be attending his funeral, citing her ‘belief in freedom’ is stronger than personal family bereavement.

Juanita Castro has lived in exile in Miami for over half a century. Unlike many Cubans – under Castro’s helm – she has lived in freedom.

Hector Maseda, 72, a former political prisoner, living in Havana, said: “In 55 years, the Cuban government has not done anything to help the Cuban people in terms of human rights.”

I spoke to many Cuban born people during my visit. Life for Cubans under Castro has been hard, with finances limited to many workers, including Doctors, whose monthly wages are as low as 25 Cuc (dollars).

Fidel Castro however is deemed a hero for many Cubans, having given his people free education free health care, and housing, despite denying many wealth.

Castro, who studied law at the University of Havana, planned to overthrow Cuban President Fulgencio Batista and formed a revolutionary group, the 26th of July Movement, with his brother Raul Castro and Che Guevara.

In the Cuban Revolution Castro lead the Movement in a Guerrilla war against Batista’s forces, overthrowing him in 1959. Castro assumed military and political power as Cuba’s Prime Minister, of which America opposed Castro’s government, and unsuccessfully attempted to remove him by assassination – and economic blockade.

In January 1961 the USA ended diplomatic relations with Cuba. The CIA planned to aid a dissident militia, the Democratic Revolutionary Front, to invade Cuba and overthrow Castro, which resulted in the ‘Bay of Pigs invasion’ in 1961.

In the Bay of Pigs invasion Castro formed an alliance with the Soviet Union. In response to USA nuclear missiles in Turkey and perceived threats against Cuba, Castro allowed the Soviet Union to place nuclear weapons on Cuba, sparking the ‘Cuban Missile Crisis’. A defining incident of the Cold War n 1962.

Russia was Cuba’s biggest ally during the Bay of Pigs invasion – but President Putin, it is reported, will not be attending Castro’s funeral on December 4.

Commander in Chief Fidel Castro shot US vessel Houston with a SAU-100 auto-propelled cannon, 100mm caliber, during the mercenary invasion at Bay of Pigs in April 1961. The cannon is on display at the MR (Museuo De La Revolution) in Havana, Cuba.

Along with Castro’s sister and Putin, outgoing American President Barack Obama, British PM Theresa May and Canada’s PM Justin Trudeau, will also not be attending a funeral ceremony for Castro in Havana next week – despite Trudeau saying Castro was a ‘remarkable’ leader.

In a message of condolence Argentina thanked Castro for his support of its claim to the Falklands Islands during the conflict with Britain in 1982.

It is ironic Obama will not be attending – in the wake of his historic visit to Cuba this year – to reconcile USA diplomatic relations after over 50 years in the wilderness.

Russia has announced that Vyacheslav Volodin will head the Russian delegation for Castro’s funeral on December 4.

One would expect the Canadian PM Trudeau would be in attendance – after Castro attended the funeral of his father, Pierre Trudeau. Governor General David Johnston, the Queen’s representative in Canada, will attend.

To Canadians Cuba is like a honeypot – with the majority of Cuba’s annual holidaymakers coming from Canada.

USA praise – and criticism – were given to Castro. USA secretary of state, John Kerry said: “We extend our condolences to the Cuban people as they mourn the passing of Fidel Castro.

“Over more than half a century, he played an outsized role in their lives, and he influenced the direction of regional, even global affairs.” 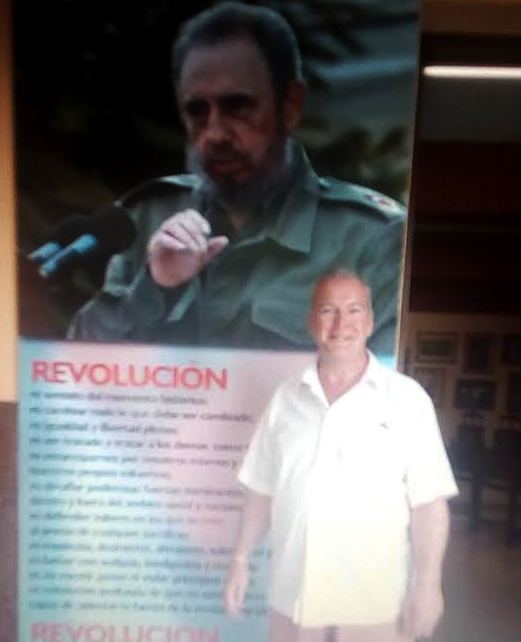 However it has been reported that Obama has been warned by Republican leaders not to to attend Castro’s funeral in Havana.

US senator Ted Cruz, of Cuban descent, said: “I very much hope that we don’t see any US government officials going to Fidel Castro’s funeral. I hope we don’t see Barack Obama and Joe Biden and Hillary Clinton and Democrats lining up to lionize a murderous tyrant and thug.”

The Cuban government produced tens of thousands of doctors and teachers – educated for free. Some Cubans thrived under Castro – many others didn’t.

I walked along Fifth Avenue, in Havana’s wealthy Miramar, where Roberto Alvarez, 52, a teacher in Havana, said: “Cuba has problems – like any other country. Fidel Castro is the historic leader of Cuba, of all of Latin America.”

Havana resident Agustin Diaz Cartaya, 85, who joined Castro in the 1953 attack in eastern Cuba that launched the revolution, said: “No one has done more for the Third World than Fidel Castro.”

Back to Hector Maseda, in Havana: “I don’t believe in this regime. I don’t trust it,” he said.

Six years ago Castro said that Cuba’s state-run economy had failed to bring prosperity to most Cubans: “The Cuban model doesn’t even work for us any more,” Castro told a journalist in 2010.

A story – with two sides of the coin – that is the case following the death of Cuban dictator Fidel Castro.

What type of wallet to choose for crypto?

Torrevieja mayor in court for denying information to opposition