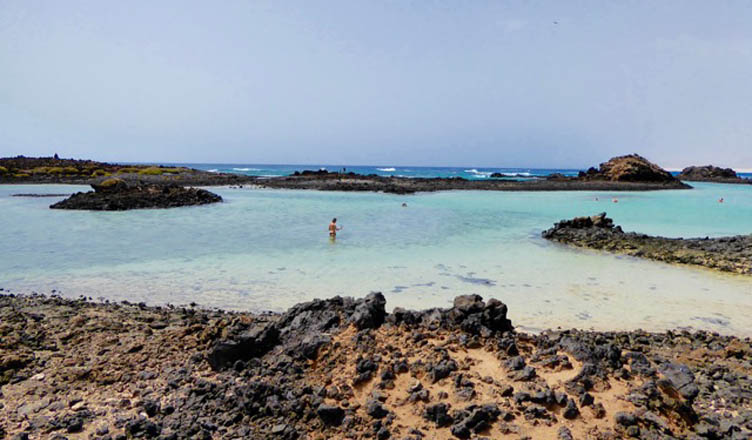 It was time again for an escape to one of our neighbouring islands. This time, it was the turn of the small island of Los Lobos (Wolves Island), which is just a short boat trip from Corralejo in the north of Fuerteventura.

There are no wolves on the island, since Los Lobos was named after the large number of monk seals that once lived there in peace. Man, in his usual style, decided to kill them all for food, their fat and skin when the island was discovered in the Fifteenth Century. Monk seals are now all but extinct in the area.

The island became a supply base for the conquest of Fuerteventura in 1405, and until 1968, the only inhabitants of the island were the lighthouse keeper and his family who operated the lighthouse at the northern tip of this small island. I couldn’t help but wonder how his children managed to get to school each day, since the sea crossing was a little choppy.

The island is now a natural park, one of the first in the Canary Islands, and is also designated as an area requiring special protection for the many species of marine migratory birds that frequent the island. None of the visitors that I travelled with seemed that interested in migratory birds, but headed off to one of the small beaches for a day of sunbathing and swimming instead.

I was interested in finding out more about a statue of a very forbidding looking woman close to the small quay. The statue was erected in honour of Josefina Pla who was a writer and professor, born on the island in 1909. She later moved to Paraguay in 1927 with her husband, where she developed an extensive and important literary career. Josefina received many awards and distinctions for her literary work for defending human rights and equality for men and women.

Surprisingly, this small island was also of some importance to the Roman Empire. The University of La Laguna in Tenerife, is currently undertaking archaeological investigations on the island to discover more about the activities of the Roman Empire around two thousand years ago. The Roman Empire had control over most of mainland Europe and North Africa, but little has been known about its influence on the Canary Islands until recently.

The island has revealed many Roman artefacts, including hooks and nails made from bronze and iron, plates, cups, lids for cooking pots and handles for kitchen and dinner utensils commonly used by Romans during this period. Archaeologists believe that these findings show that Romans visited this island, as well as other Canary Islands on a seasonal basis, rather than for permanent occupation. So why were they so interested?

Designer fashion in clothing for men and women was as important during Roman times as it is now for the rich and important in society, but purple dye for clothes could only be made from red-mouthed rock shells or sea snails. However, these sea snails are difficult to find, but Roman explorers found them in abundance in the Canary Islands, where they are also known as carnadilla.

Buildings found on Los Lobos appear to have been the processing plants to extract the purple dye from these sea snails that was then used for luxury clothing items that gave a sign of social distinction in Roman Society. These purple dye factories date from the First Century BC to the First Century AD and were found at the south west of the island near to La Concha beach, which is also called La Calera beach.

Archaeological findings such as these are important as they suggest that Roman influence on the Canary Islands could have been more important than previously thought, as historians had believed that the Roman Empire had mostly remained on mainland Spain and North Africa. Coastal regions of Morocco were used by the Romans as a centre for its purple dye industry, which would also link to the Canary Islands in the search for the hard to find, but valuable sea snails.

My brief visit to the island was a wonderful experience and reminded me yet again of the rich variety that we enjoy from all the Canary Islands; each one is unique. Sadly, I didn’t get a moment on those much reported beautiful beaches, as I was far too busy taking photographs and exploring the island. Hopefully, I will return again very soon.