It might have been April 1st, but Thader Rojales were certainly not in the mood to be anyone’s fool.  Having suffered a disappointing defeat at Novelda a few days earlier, Raul’s men were strengthened by the return of previously suspended Rafa and Quino.  This preferente league match against Elda Union, was the last of the first round of matches, in which Elda found themselves firmly in the relegation zone.

As early as 2 mins, from a Thader free kick, Cabrera picked up a rebound before striking it into the side netting.  From the very next attack, the same player sliced his shot wide, and another glorious opportunity was wasted.  Rafa fired a cracking 25 yarder on 12 mins, which although the visiting keeper did well to parry, fell nicely for front man Quino, who made no mistake from 3 yards.

Unfortunately, the big man was forced off midway through the 1st half, clutching his hamstring as he departed.  Thader extended their lead on 27 mins, when from a peach of a corner, Fran rose superbly to powerfully head home from 10 yards.  A defensive blunder on the halfway line between Calderon and Dani Lucas, resulted in Castillo running unchallenged, before planting the ball past Thader keeper Adrian.

Although the 32nd min goal reduced the deficit, it was Thader who finished the half strongest.  When Rafa unleashed one of his long-range belters on 35 mins, it looked a goal all the way, but a deflection diverted it past the post.  Kike came closer still a couple of minutes later, his goal bound effort was cleared off the line before being belted to safety.

With time edging towards half time refreshments, Fran picked up a soft yellow card, which annoyed his manager so much, that his choice words to the ref were rewarded with a visit to the stands, and a probable future suspension.

A glorious right-wing cross on 50 mins found Nano lurking with intent, but unfortunately his firm header struck the post.  On the hour mark, once again a foray down the right wing resulted in another excellent cross, only this time it was hit on target by the impressive Nano.

Although the ball was quickly hoofed up field, an eagle eyed asst ref flagged for a goal, judging that the ball had crossed the line beforehand.  Thader were by now in total control, as illustrated when Lloyd’s long-range effort hit the post, then Kike spurned at least 3 chances to score.

So, a well-deserved 3 points consolidated Thader’s 10th place standing, and with lowly Orihuela ‘B’ set to visit Moi Gomez Stadium on Easter Monday, things are looking up for the men in blue and white stripes.

A 90th min goal consigned Thader to a narrow defeat on the opening day of the season away at Orihuela, so revenge is very much on the cards for this next encounter. 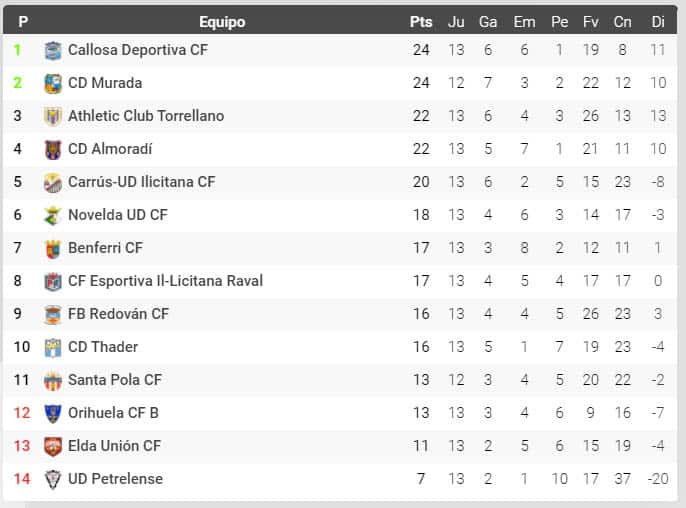