Coronovirus lockdown rules are being broken by people dropping off family at Manchester Airport, with multiple fines being handed out by police.

Future flights from Manchester to Alicante-Elche airport are scheduled for March 13 and 20 with easyjet (TBC).

Legally, people will have to notify airlines of the reason for their journey from Monday March 8, 2021.

Large groups of people have been found dropping family members off – and entering the departures terminal. Under the lockdown regulations it is not allowed.

Now Greater Manchester Police say people must have a valid reason for travel. 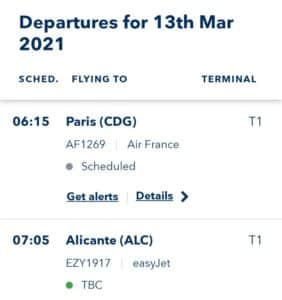 Chief Inspector Andy Sutcliffe, at Manchester Airport, said the issue is risking the health of everyone in the terminal.

“Traditionally people arrive at the airport to wish loved ones and family members a safe flight and to wave them off,” said Chief Insp. Sutcliffe.

“Unfortunately at the moment this is not possible, due to Covid-19 and the regulations that the Government has put in place.

“We are trying to minimise the number of people in the departures terminal and this is not possible, when people who are not travelling enter the area.

“It’s risking the health of everyone in the terminal, including my officers who have to actively engage with them to question why they are there.

“Only people who are travelling on a pre-booked flight should be in the terminal and they should be dropped off by one person from their household, or bubble or by public transport.

“We are patrolling in-line with Government regulations and will do all we can to reduce the spread of the virus and protect the legitimate users of the airport,” said Chief Insp. Sutcliffe.

Under the stay at home lockdown rules people can only travel if it is essential.

“If this is not possible a taxi or public transport is the best method of travel, to prevent large groups gathering inside the terminal,” a GMP spokesperson said.

“Officers will be on patrol to engage with people in an effort to keep others safe.

“You may be stopped and questioned if they suspect you are not there to travel and an FPN may be issued,” they added. 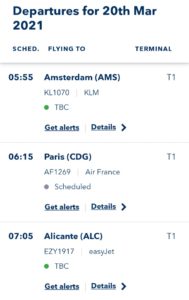 Spain has restricted the entry of all travellers except Spanish nationals and residents, and accompanying immediate family members.

The same applies to travellers with a long-term visa issued by a Schengen Member State who are returning to their place of residency.