“As long as I have enough money to bury me, I don’t care”, is a sentiment often expressed by old people in this country. I used think that this fear of not leaving enough for the funeral was a peculiarly Irish thing – perhaps dating back to the stigma of being buried in a pauper’s grave.

Even from my youngest day I could never understand this anxiety – to me it does not matter. Whilst it is my wish and stated intention to be buried among my own people, if a fortune-teller told me that after my death there would not be enough money to bury me, I could live with that. You see, I know someone would bury me for nothing – eventually.

Even though this will come as a shock to my adoring fans, after a few days dead there would be a ‘whiff’ off me, another couple of days and there would be a ‘pong’: We will leave it at that, but I guarantee you that after another day or so someone would bury me for nothing.

Like I said, I thought that worrying about the cost of one’s own funeral was only in Ireland, but I have observed that this is far from being the case. Paying for your own funeral in advance is becoming more common in the UK. Sometimes the person pays a lump sum, but more often they pay instalments or some type of funeral insurance policy.

The wording of advertisements for these policies strikes me as being the saddest aspect. They talk of keeping up with inflation between now and your death. Some include cremation fees, plot and church service; others don’t. The wordings on some such advertisements which I’ve come across in Spain are hilarious as well as sad and we will come back to those in a moment.

Perhaps the reasons that more people are organising their own funeral is because the family unit has become so fragmented and more people are reaching retirement age in a state of debt – four times more than a decade ago. I like to think that this situation is not as bad in Ireland.  A study by “Help the Aged” and Barclay’s Bank in England found that a quarter of people approaching retirement age have ‘outstanding consumer credit commitments’ – a nice way for saying they owe money.

It is mostly this unfortunate group which is targeted by funeral planners. Again, I say ‘forget it’ – don’t worry about death; only the living need money, so spend the few bob on yourself now!

I have come across some not-well-off elderly ex-pats living in Spain. They came to Spain when the cost of living there was really cheap. Now, their fixed pension does not stretch as far as it used to and this has spawned dozens of funeral plan advertisements appearing in the local newspapers. 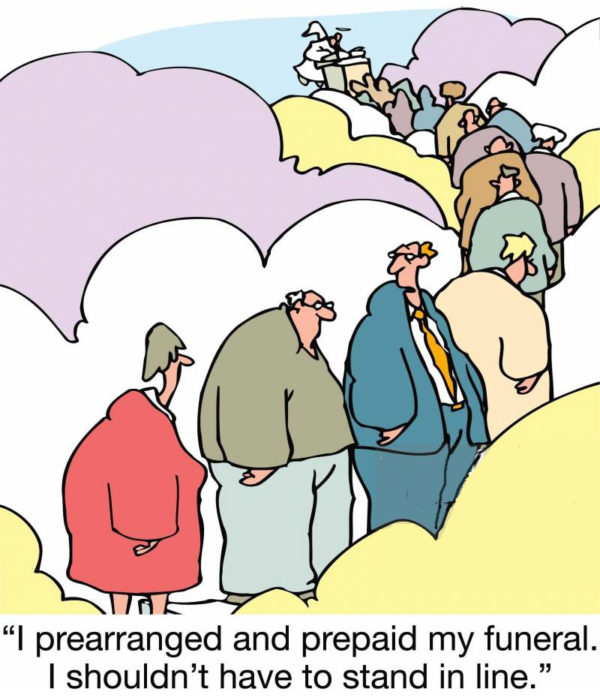 The banner heading of many of these ads are pathetic as well as funny; “SORT OUT THE COST OF YOUR FUNERAL AND YOU NEED NEVER WORRY AGAIN”. Can you beat that…? In one stroke of a pen you sign away all worry for the rest of your life! “WHEN YOU REACH OLD AGE YOU WANT TO BE ABLE TO LOOK FORWARD WITH CONFIDENCE TO THE FUTURE.” Think about it and no, I did not make it up; these are taken from real advertisements.

“WE ONLY USE FUNERAL DIRECTORS WHO ARE FLUENT IN ENGLISH.”  Ah now, isn’t that reassuring? If someone makes a mistake and you’re not really dead, the undertaker will understand you if you ask to get out of the coffin!

Another ‘Funeral Planner’ uses scare mongering to encourage you to bank on a Brit to bury you. This is his sales pitch: “Spanish funeral directors can hold onto the body and charge you for every day the funeral is delayed.” I can picture the scene; the Spaniard comes in again the next morning and addresses the English corpse on the marble slab: (In Spanish, of course, – which he wouldn’t understand if he was alive)

“Senor; because you had no money to bury yourself yesterday, it will now cost you another hundred Euro!” I say to Mathew on the marble; hang tight Mate, a week on that slab in the heat of Spain and it won’t cost you a red cent!

But there is one such advertisement which caught my eye and caused a second glance. It is formulated in a series of questions set to reassure the prospective corpse. All the questions relate as to why this plan is the best deal for any man faced with the prospect of going down.

It is the last question which gave me immeasurable hope for my options when my time comes. I like it!! If I am to hire a funeral director in Spain I shall definitely go with this outfit, because their last question simply asked; “WHAT IF I CHANGE MY MIND?”……….!!

Don’t die until you are dead.