The province has declared 20 tobacco-free beaches around El Campello, with all its coastline, and the coves of Elche and Dénia.

The province of Alicante has said that it intends to ban smoking on all it’s beaches with the first announcement made at the weekend prohibiting smoking on 20 coves and beaches in four different municipalities, where it is advisable not to smoke.

They say that the covid-19 crisis has made the smoke-free beaches project, promoted by the Generalitat last year, even more necessary now, due to the high risk of contagion from cigarette butts and the unknowns about the virus transmission through smoke.

El Campello, Elche, Dénia and Finestrat have now introduced the measure that many hope will lead to a total ban on smoking on all beaches within the next few years.

The unpleasant image of seeing cigarette butts buried in the sand or inhaling the smoke of a neighbour while sunbathing seems to have its days numbered … although the province is late in its arrival for this environmental and sanitary trend.

Galicia, for example, stands out; an area that has been promoting free beaches without smoke since 2012, but as a recommendation, and where there are already 162 coastal and river beaches taking part in the program, which gives them more credibility as them a tourist attraction and an additional environmental value.

In the Valencian Community there are already 22 smoke-free coves in six different municipalities. The first introduced the measure last year Oropesa (Castellón), and to this informative and awareness initiative promoted by the Ministry of Health and the Valencian Federation of Municipalities and Provinces, El Campello, Elche and Dénia have all joined this year, as well as Cullera in Valencia.

In addition, Finestrat has gone even further with its anti-smoking campaign within its plan to deal with covid-19 in La Cala where it has included in the battery of measures to prevent contagion including a smoking ban under threat of economic sanctions.

The El Campello case is significant. The municipality was already a pioneer with the introduction of canine beaches in the Valencian Community in 2013, which have now spread throughout the province. And now it is the first in the province to join this campaign announced by the Generalitat , and not with a single beach, but with its entire coastline. Twenty-three kilometers of coastline where there are 17 coves and beaches, including the popular Muchavista and Carrerlamar beaches. An initiative that started with a motion from Compromís and that has now been developed by the Department of Beaches, under the direction of the mayor Julio Oca (Cs). 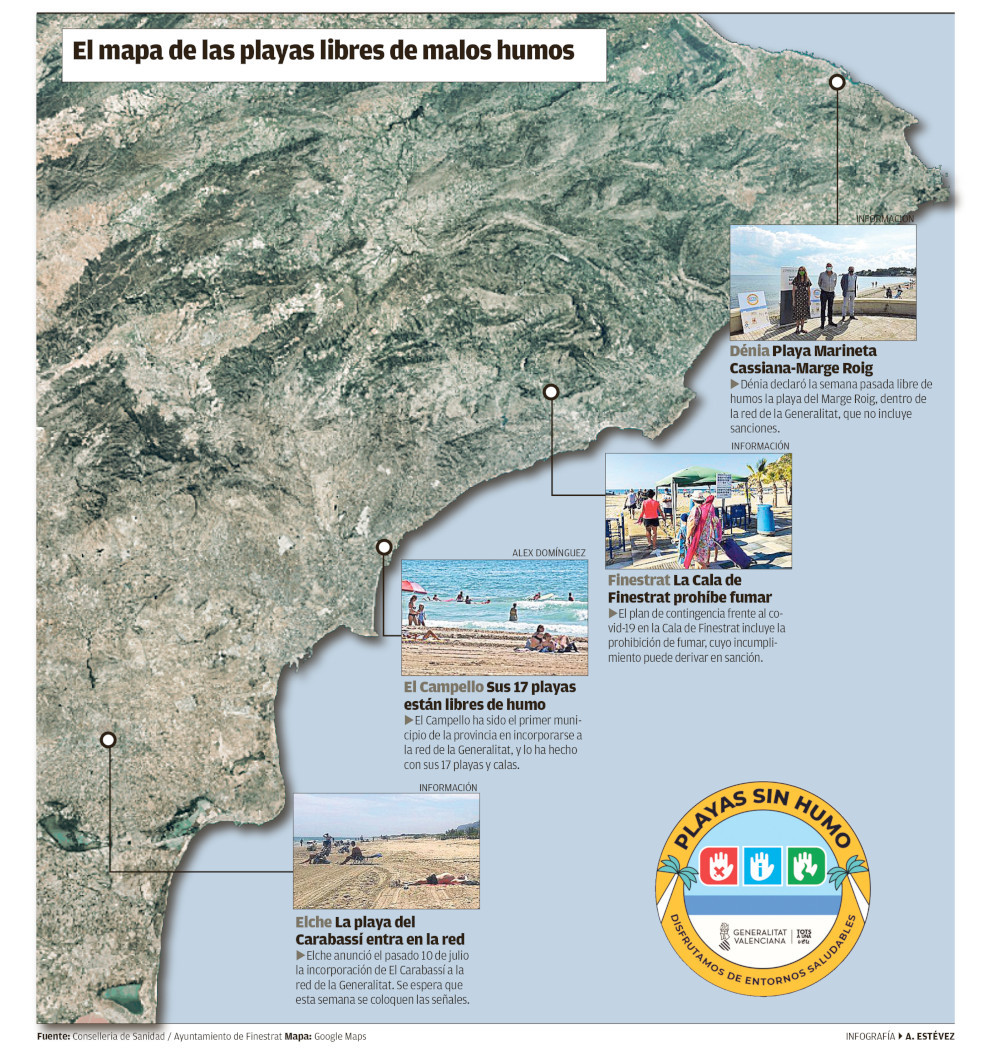 The mayor said that “We have to take care of our natural environment, cigarette butts take 10 years to disappear from the sand and they are understood to be a very important means of transmission of the coronavirus. We are very proud to be the municipality that has the longest stretch of coastline that free of smoke and to be pioneers in this initiative”.

According to the Ministry of Health, this project is motivated by the fact that many municipalities want to create healthy spaces for residents, promoting environments to increase people’s health and to preserve the health of the Community.

Elche approved the measure a few days ago adding Carabassí beach to the network, and it is expected that this week flags and signs will be installed to identify it as a smoke-free beach.

Dénia was the most recent municipality to join the scheme. Last Thursday the Autonomous Secretary of Public Health, Isaura Navarro, visited the town to make the addition of the Marge Roig beach official: Navarro said that the objective is “to promote healthy attitudes and habits through an environment that is respectful to both people and to the environment”.

Alicante has studied but ruled out the measure for the time being, and towns such as Benidorm, Altea, l’Alfàs say that they are not considering it for now.

In the Vega Baja, initiatives of this type have not been introduced either, although it seems only a matter of time before their beaches also become areas that are finally free of smoke and cigarette ends.