A total of 39 people have died with COVID-19 in Spain in the last seven days, according to figures published by the Ministry of Health this Wednesday. The number of deaths since the start of the epidemic now stands at 27,118, however, that is only one more death than the number reported yesterday.

After last Monday Health have modified the data collection system to obtain individualized information on each case in the autonomous communities, correct series and eliminate duplicates.

The director of the Centre for Coordination of Health Alerts and Emergencies, Fernando Simón, said that the mismatches in the figures “will continue” for a few days.

In addition, 231 new cases have been diagnosed, 37 more than Tuesday, bringing the total number to 236,769. This represents a small increase in new cases, since yesterday there were just 194. In the last seven days there have been thirteen ICU admissions (11,374 overall) and 283 hospitalisations (123,657 since the start of the pandemic).

Once again the Ministry of Health says in its report that “an individualised validation of the cases is being carried out, so there may be discrepancies regarding the notifications from previous days.” Regarding the historical number of deaths, they say that “a validation of the deceased cases is being carried out that will allow the historical series to be corrected, which will then be updated weekly.”

The thirteen admitted to the ICU in the last seven days have occurred in Andalusia (two), Aragon (two), Castilla-La Mancha (3), Catalonia (one), the Valencian Community (one), Galicia (one) and Madrid ( three).

The 283 cases that have required hospitalization in the last week have been located; 20 in Andalusia, 19 in Aragon, four in Asturias, six in the Balearic Islands, three in the Canary Islands, three in Cantabria, 22 in Castilla-La Mancha, 27 in Castilla y León, 54 in Catalonia, two in Ceuta, 10 in the Valencian Community, nine in Extremadura, two in Galicia, 88 in Madrid, one in Murcia, ten in the Basque Country and three in La Rioja. 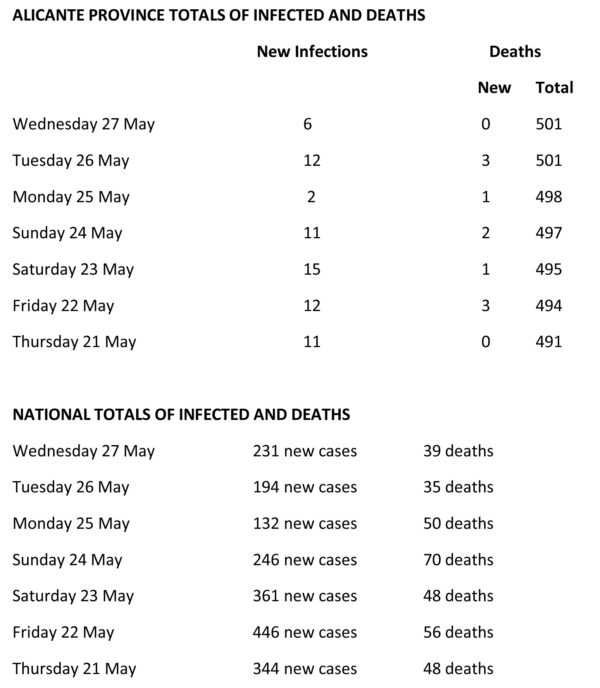 The province has not registered any deaths from coronavirus in the last 24 hours, according to data provided by the Ministry of Health. In the Valencian Community there has only been one death and that was in Valencia. The number of new infections is six, which brings the total number of infected people in the province to 3,876.

72% of those cases detected in the Community have now been cured. In the last 24 hours, 224 more have been registered, bringing the total to 11,402. Of these, 4,068 in the province of Alicante. Since the move to phase 1 of the de-escalation process began in the Valencian Community, on May 11, registrations have increased by 29%.

The number of patients in the Coronavirus Intensive Care Units continues its downward trend. As of today, there are only 27 people who are in ICU in the entire Community, 2 less than in the update on Tuesday. By provinces: 4 in Castellón, 12 in Alicante and 11 in the province of Valencia.

The number of hospitalized coronavirus patients has also decreased compared to the last update. There are currently 206 people admitted, 5 less than yesterday. By provinces: 15 in Castellón, 61 in Alicante and 130 in the province of Valencia.