The Valencian Community has added 11 new cases, confirmed by PCR, in the last 24 hours and 6 deaths (3 in Castellón, 1 in Alicante and 2 in Valencia). The figures were released this Tuesday morning bt the Minister of Health, Ana Barceló at her daily press conference

Of these new infections, 2 are from the province of Castellón, 3 in Alicante and 6 in Valencia. Currently 3,497 cases remain active, 25% of the total detected since the start of the health crisis.

Based on the data provided by Barceló, the evolution in hospitals is also favourable there have been 144 new discharges of patients who had been infected (7 in the province of Castellón, 69 in Alicante and 68 in Valencia), bringing the total number of recoveries to 9,089.

According to the minister, with this data, 65% of patients have now been discharged due to coronavirus since the start of the health crisis. In addition, she said that in the last two weeks the number of discharges have grown by 41.5% and 21% in the last week.

She also underlined that hospital admissions continue to decrease, with 20 fewer patients than on Monday. A situation that is reproduced in the Intensive Care Units (ICU), with 5 fewer hospitalised. However, 458 patients remain in the community’s hospitals and 82 of them are still in ICU at the moment. The provincial breakdown, there are 37 patients in Castellón (9 in the ICU); 137 in Alicante (38 in ICU) and 285 in Valencia (35 ICU).

Barceló said that 4 of the deaths correspond to people who contracted the disease in a nursing home. In addition, a nursing care worker died at the Virgen de los Lirios de Alcoy Regional Hospital who had been hospitalised for a month. 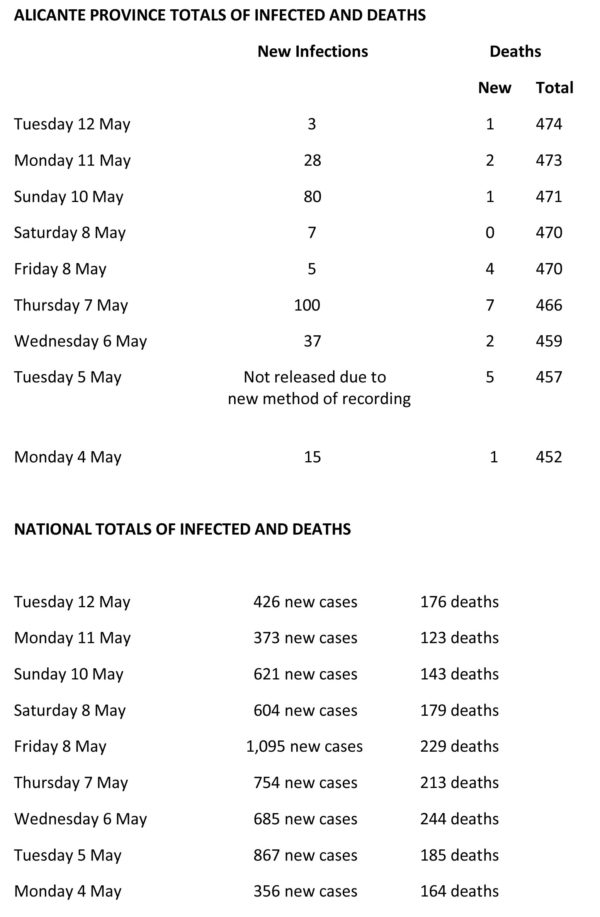 There has been a slight rebound of new infections and daily deaths in Spain with 176 further deaths  and 426 new cases (an increase of 0.19% compared to yesterday) in the last 24 hours. The Ministry of Health now confirms a total of 26,920 deaths throughout the country.

Health also reports 228,030 cases confirmed by PCR, 426 more than on Monday. This figure also represents an increase in daily cases, which on Monday had been 373 infections.

Travelers arriving in Spain from abroad must be quarantined for 14 days after arrival, according to another order from the Ministry that will be effective from next Friday.

Any person from another country, upon arrival in Spain, must remain at their home or accommodation, and can only leave it in certain cases, such as for the purchase of food, medicine, or cases of force majeure, outings in which the use of a mask will be mandatory.

Furthermore, the Ministry of the Interior has decreed the reestablishment of controls at the internal air and sea borders.

Fernando Simón, director of the Ministry’s Health Emergency Coordination Centre, on quarantine for people arriving in Spain, said that as the epidemic is controlled in Spain, our greatest risk will again be the importation of cases from abroad. “Mechanisms will be established to follow up on this quarantine and norms will be established to avoid inconsistencies,” he confirmed.