I DECIDED NOT TO SHOW a picture of a glorious golf course this time, you’re depressed enough.  Instead this is Augusta National before Bobby Jones and Dr. Alister McKenzie got to work on it.   A talent for design combined with unlimited dollars can work wonders.

Founded in 1932 on the 365-acre site of a former nursery called Fruitland.  Augusta National Golf Club  has hosted the Masters Tournament since 1934.  This April the 300 members had it’s perfect greens and fairways all to themselves, until last week when the course was pronounced closed until further notice.

It always closes from May to October anyway so the members can’t complain.  The chap who can complain will be the owner of the TBones restaurant in Augusta village.  He’s had to cancel his usual Masters Week order for 6,000 pounds of steak! 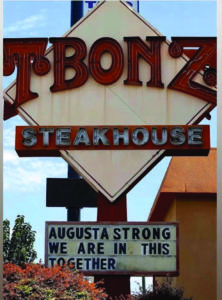 THE CHARITIES WHO BENEFIT from the The PGA Tour will lose out this year.   A record $204.3 million was raised in 2019 to bring the all-time total to $3.05 billion.  The Players Championship alone generated $9.25 million in 2019, most of which benefited local children’s charities.

Unlike other professional sports organizations, the PGA TOUR relies on more than 100,000 volunteers annually, and most of  it’s tournaments are structured as non-profit organizations donating 100 percent of net proceeds to charity.  Beneficiaries include hospitals and shelters; youth programmes; and groups that support the military and their families.

The  PGA Championship, scheduled for 14-17 May at Harding Park will now be played 6-9 August.

The Ryder Cup potentially still scheduled for 25-27 September at Whistling Straights, Wisconsin, though not sure how the players are going to qualify.

Augusta National has posted 9-15 November as the revised date for the 2020 Masters Tournament.  However the Augusta National Women’s Amateur has been cancelled.  I should sue for discrimination, girls.

The PGA Tour has outlined plans to financially assist players and caddies, including an advanced-payment based on projected FedExCup earnings.  What a relief for Woods, Mickelson et al.  However, Keith Pelley, European Tour CEO,  told his players that the European Tour is “simply not in a position to do that.”

Pelley also warned that because of the impact of Coronavirus  “The 2021 European Tour schedule  and infrastructure of tournaments could look radically different.  Many of the things you have become accustomed to, such as top-class players’ lounges or courtesy car services will probably assume a different appearance, if indeed they are present at all.”

THE 2020 BBC SPORTS AWARDS may not be held this year.  Just as well, they don’t often reflect the actual achievements of Britain’s top sportsmen and women.  If they did Rory McIlroy would have won in 2014 after winning the US Open and PGA Tournament as well as being on the victorious Ryder Cup Team.  He was awarded an MBE, which must have thrilled him.  Still, better than poor Henrik Stenson; in Sweden’s 2017 top sports awards Henrik was voted 2nd to a  horse!

Here’s to Happy Golfing in the not-too-distant future.  Look out for end-of-lockdown special offers.