According to figures provided by the Valencian Community Ministry of Health, in the last 24 hours there have been 217 new cases in the Valencian provinces, 24 deaths and 224 discharges from hospital.

By provinces, the most affected has been Castellón with 118 new cases, followed by Valencia with 57 and Alicante with 42. Also by province, discharges in Valencia numbered 115, Alicante 57 and there were 52 in Castellón.

Of the 24 deaths in the community the number recorded in Alicante province was 5.

Since the beginning of the health crisis, 11,123 infections have been detected in the Community, of which 1,172 have died and another 6,033 have overcome the battle against the virus.

Currently, a total of 812 patients remain hospitalised, of which 160, 10 fewer than yesterday, are in the ICU, which represents a reduction of almost 26% compared to last week.

COVID-19 has been particularly active in nursing homes where positive cases and the number of deaths continues to increase. Currently, there are 33 care homes with positive cases.

Of the 24 deaths registered in the last day, 16 are residents in these senior centres, although the province where they have taken place has not been specified.

Spain has registered 378 new deaths from coronavirus in the last 24 hours, so that there are now 22,902 people who have lost their lives since the start of the pandemic. The figures shows a slight rise compared to yesterday (367 deaths). 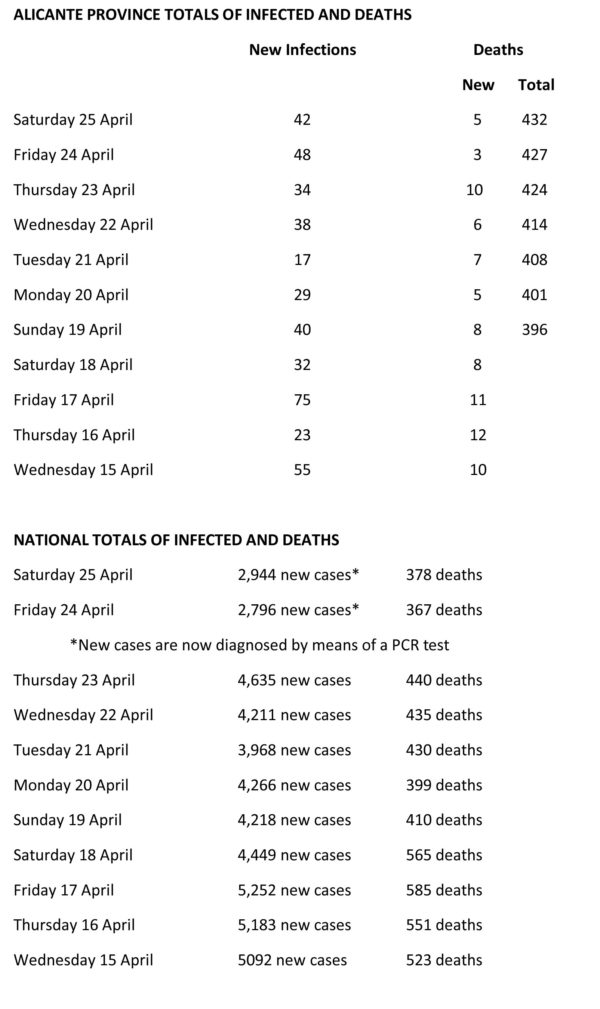 Spain is, by far, the country in the world with the most health care workers infected with coronavirus, according to the official data.

A report published on Thursday by the European Centre for Disease Control and Prevention (ECDC) shows that of all the cases registered in Spain, 20% of the figure relates to healthcare staff,

In Italy that percentage drops to 10 % – although in Lombardy, the epicentre of the epidemic in the country, the percentage is also 20% . In the United States, infected healthcare workers barely reach 3% and in China it stands at 3.8%.

At the outset in Spain, there were no masks for the staff and when they did arrive, many were defective. Even now there are still many doctors and other healthcare professionals who have not been tested.

This Saturday, the BOE has published the extension of the state of alarm until May 9 and the order by which from this Sunday the “children under 14 years may take “a daily walk, maximum one hour long and a distance of no more than one kilometre from the child’s home, between 9.00 and 21.00.”

According to Health, from the age of 14 they can carry out the permitted activities such as going out to make basic necessity purchases.

The World Health Organization (WHO) has argued today that “there is no evidence” that a person who has recovered from the coronavirus cannot re-become infected and has alerted countries that immunity passports for recovered patients may increase the risk of contagion.

2.8 million people have now been infected and 197,217 have died worldwide from the coronavirus pandemic, according to Johns Hopkins University.