The wind picked up at La Manga Club and provided testing conditions with only six players out of the 120 Final Stage Qualifying field under par across at the resort in Cartagena, Spain. One player who didn’t struggle was England’s Alice Hewson who fired an impressive three-under-par 70 on the South Course to take the overnight lead.

In 1975, American legend Arnold Palmer famously finished with an eagle on the par-5 18th hole on the South Course to win the Spanish Open by one shot and La Manga Club dedicated the hole in honour of him. Like Palmer, Hewson finished the round in style with an eagle on the par-5 18th and jumped to the top of the leaderboard on three-under-par, one shot clear of Sweden’s Josefine Nyqvist and Scotland’s Alison Muirhead.

The 22-year-old European Ladies’ Amateur Champion, from Berkhamsted Golf Club commented: “It was a nice way to finish with an eagle, it was definitely a highlight. I split the fairway with my drive, I had 189 yards to the pin and hit a six iron to three feet.

“In the wind you just have to stick with your game and trust your swing and today I stuck to my processes and swing thoughts. I am going to approach the next two days like I have over the last couple of weeks. It’s all about hitting fairways and greens out there and giving yourself good opportunities. They will come, the North and South are not courses that you are going to go bogey-free every round. I’ve got to keep giving myself the opportunities and let the putts go in.” 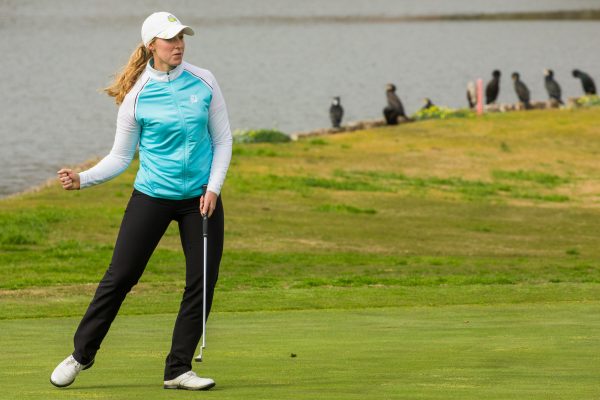 Nyqvist, who graduated from Augusta University two years ago, posted a two-under-par 71 on the South Course to move into a share of second position on two-under-par. The 25-year-old was extremely happy with her round and reflected: “It was tough out there today so I just tried to keep the ball in play from the tee all the time, hit the greens and make my pars. I managed to roll in some birdies near the end, so that was a lot of fun.

“I was at Augusta University for four years and we got to play Augusta National once every year. That was amazing! La Manga Club resort is amazing too. Following the storm the greenkeepers did an incredible job, the courses are in great shape.”

It was a tough day for the overnight leader Muirhead who posted a six-over-par 77 on the North Course but she can still be buoyed by the fact that she sits in second place with two rounds to go. EunJung Ji, Amy Boulden and Sophie Hausmann finished the third day on one-under-par.