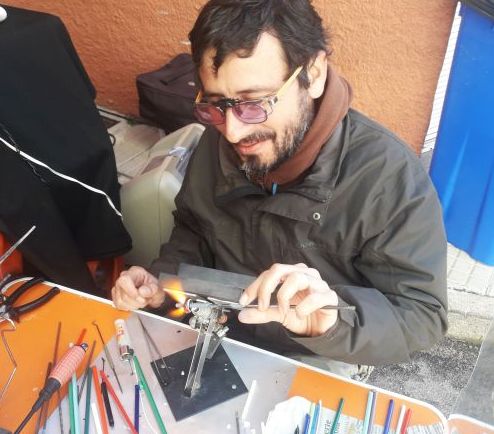 In the first week-end in February, Pedreguer will be celebrating its annual San Blas festival.  It starts on the afternoon of the 1st of February, with the transfer of the Patron Saint to the chapel at the foot of the hill and continues till late Monday afternoon, when the statue is brought back to the village church.  The programme includes processions, fireworks, concerts and dances and this year for the second time an Arts and Crafts Fair of Amata.

Well, not really the second time, because last year they had to pack up on the morning of the second day, because strong winds made it impossible, and even dangerous!, to open the stalls. This year they’ll try again, hoping for better weather.

The fair will be set up in the Plaza Mayor, next to the church and the old porches where the concerts and dances will be held.  There is ample space for the twenty or so craft stalls, the demonstrations and workshops, table games and the old fashioned merry-go-round.

Every three years there is a different group of people organising these fiestas and last year’s comission “Festes Sant Blai 2017-2019” decided to include an Amata fair in their programme. The stormy weather was a spoilsport, and the fair was postponed to the end of March.

This year there is a new commission and as they liked the high quality of the fair last year, they decided to invite Amata again. This regional craft associations makes sure that only real craftsmen and women participate and that everything on sale is made by the participants themselves.

Some twenty stalls are expected, each one offering something different, all hand made and guaranteed “made in Spain”: spoons and combs made of cow horns, broches made of real orchids or sea shells, colorfull beads made on the spot from glass in the flames of a blow torch, and beautifully paintes tiles. You can even watch the ceramist painting them. The shoe maker will also be at work on the fair.

The main festive day of the fiesta is the day of the Patron Sains, Sant Blas, the 3rd February, and this year that is a Monday. As the fiestas last three days, the fair opens on Saturday at 12 noon, till 2pm and then again from 5 till 9 pm.

On Sunday and Monday opening times are from 11 am till 2 pm and then again from 5 pm till 8 or 9 (depending on the weather).  To get an idea of what to expect you can look at photos of last year’s fair at http://www.amata.es/Pedreguer-2019.html, taking into account that some of the participants will repeat, but there will also be several different stalls.

For more information, also in English, you can ring 639 979 678 and any last minute changes will be announced in Facebook at “Amigos de Amata”.

Pedreguer lies in the North of the province of Alicante on the N-332 coastal road – if you come by motorway A7 (since 1 January it’s free!!), take the exit Denia. Every Sunday morning there is a big car boot sale on the industrial estate of the village.