What a great morning.  The Provincial Select brought players from 9 local Clubs to celebrate our 30th Anniversary.  Unfortunately our Captain Dave Hadaway was taken ill with Man Flu and was unable to play. Also the provincial Captain was unable to take part after having a fight with his cat. It would appear that the cat won.

The provincial won as well on five out of the six rinks.  Our winning rink was skipped by Shirley Hadaway  with Dave McGaw (ey man), Jeff Halfhyde and Margaret McLaughlin 21 – 12.  Two other rinks were very close, Mick Lowe, Arthur Cronk, Jean Tregoing and that Ann Stone fought well and there was only one in it for nine ends eventually losing 15 – 16.  All told the Tregoings, the Stones and the Cronks did alright for their rinks plus Garth Slater. 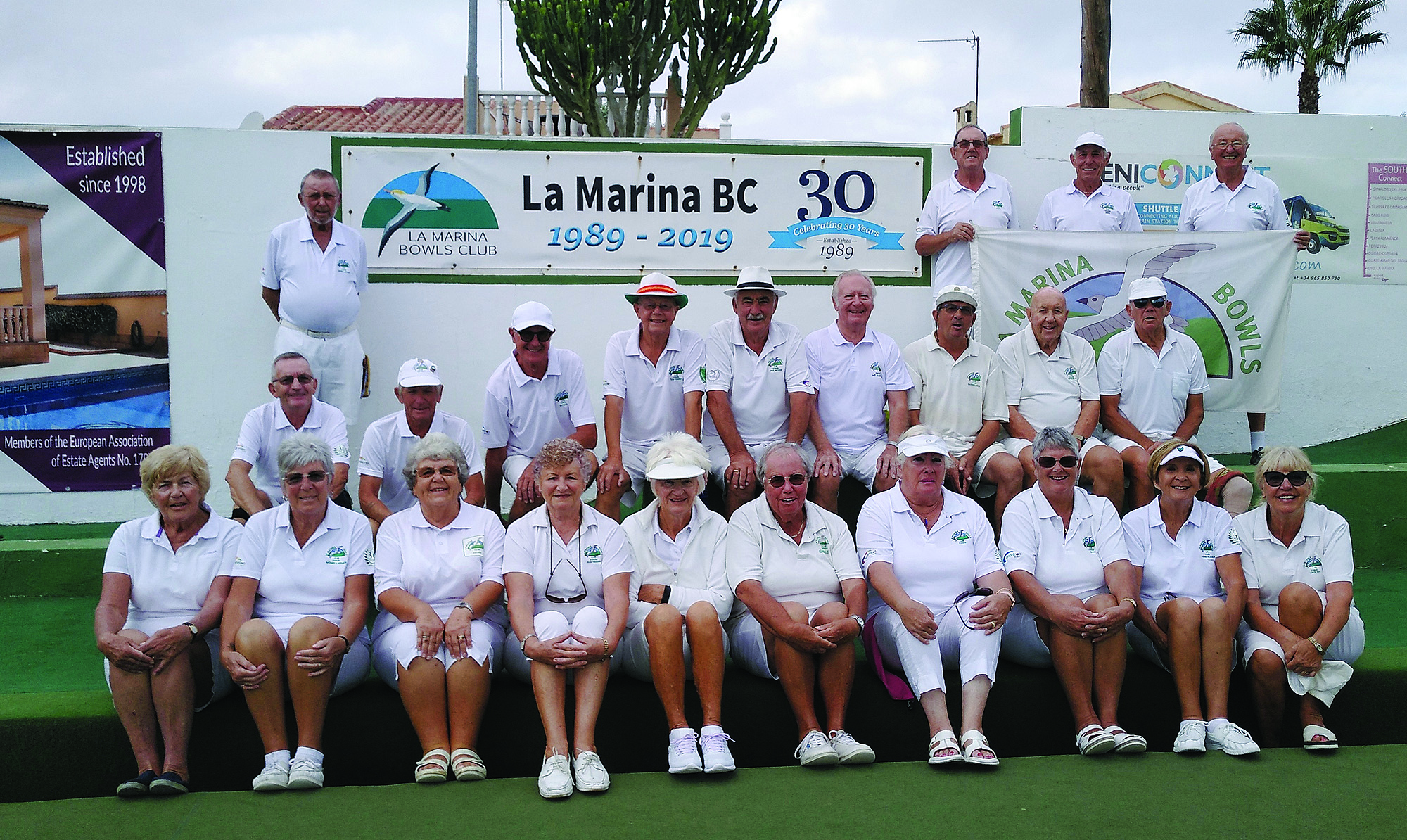 Afterwards we were treated to a delicious paella provided by the owners and the President Dave Taylor and Captain Dave Hadaway provided a well-earned drink of cava.  Thanks also go to Councillor Darren Parmienter for his speech after the game going over the history of the Club. Thank you to everyone who took part or watched for making it a really good celebration.

The Explorers entertained Vistabella in the Enterprise Division and won a hard fought match 8 – 6.  Three winning rinks each with ours coming from Alex Whyte, Jim Reeves and Hilary Cronk 17 – 14, Mick Stone (are you coaching him, Anne?) plus Phil Pape(welcome back) and Kathy Manning 19 – 10 and Peter Parsons (another welcome back) Margaret McLaughlin and Mo Kidd 21 – 9. Plus two points for the overall score.

On to Winter League where we faced our old rivals Quesada at our place. Sounded a good game with both sides winning two rinks and drawing one.  Quesada getting the bonus points on better shot difference. The draw  was 16 each played by Shirley Hadaway, Phil Pape, Tony Langford ( first game, well done) and you guessed, Anne Stone.  Not to be outdone Dave Hadaway outdid his wife by winning by 16 – 15 with Jean Perchard, Mike Smith and Mo Kidd.  Mike Stone, Wendy Latham, Barbara Forshaw and Roger Stacey outdid Anne by winning 15 – 12.

We went over to San Luis to play their Tigers and they did well to beat us. Interestingly who has the quickest green now them or El Rancho? Again tied on rinks won but they had a better shot difference.  Our winning rinks contained the Stones again.  Rolling stones gather the most points!!! Mo Kidd, Carole Smith and Mick Stone won 21 – 17 while Anne Stone, Jim Reeves and Alex Whyte triumphed 18 – 14.

Not to be outdone the Captain Tom Spencer won 19 – 11 with great help from Phil Pape leading and Wendy Latham.