The Genera del Aire Academy (AGA) has now confirmed that those killed in the air accident in the Mar Menor on Wednesday morning are Air Force Commander Daniel Melero Ordonez, 50 years old and a native of Cádiz, and Ensign Rosa Almirón Otero , aged just 20 years and from Lucena (Córdoba).

The pair died when their aircraft plummeted into the sea in Santiago de la Ribera, in front of the yacht club after, according to a witness who was walking along the beach, after the engine developed a strange noise.

The mayor of San Javier, José Miguel Luengo, attended the scene, along with the President of the Murcia Community, Fernando López Miras. The pair were on a walkabout of the area, inspecting the damage caused by the recent floods.

As he offered his condolences Luengo explained that Commander Melero was one of the most experienced pilots at the Training Academy and he will be sadly missed by his many colleagues. 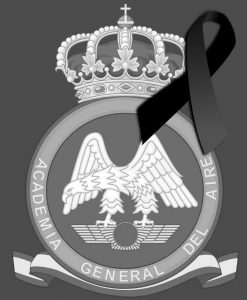 Meanwhile the Acting Defense Minister, Margarita Robles, in statements to the media during a visit to the Base of El Goloso (Madrid), has reported that the cause of the accident was engine failure that occurred shortly after take-off.

She said that the aircraft had flown earlier in the day, returning safely to the base, after which it was checked. There were said to be no reported problems.

The Pillán aircraft is used by the Air Force as a trainer, replacing the Bücker and the Mentor. There are currently 35 of the aircraft in use in Spain.

With a length of 7.97 m and a height of 2.34, the aircraft is of Chilean origin and was designed to replace the Beechcraft T-34 Mentor. It is a highly modified version of the Piper-Aztec-for military use with a maximum speed of 311 kmh

The CASA Company assembled 41 of the planes in its factory in Getafe from kits supplied by ENAER, which were sold to the Air Force as a selective teaching aircraft where they are used exclusively by the School of the General Air Academy.