Last season, Thader and Alicante Uni finished in 7th and 8th positions respectively, so last Saturday’s encounter inside the University campus was always going to be close.

After a thorough set of pre season friendlies, Thader were more than ready for this opening match in the Preferente division, having made no less than 14 new signing in the summer.

A 5.30 ko on the last day of August, when temperatures hovered around low to mid 30s, were sensibly dealt with by a drinks break in both halves of the match.  New manager Jon Ortega has a tall order in replacing the highly respected and successful Rico, but he has worked hard by recruiting a mixed blend of youth and experience, required to meet the demands of the standard required.

Calderon looked to have opened the scoring after only 7 mins, but his great strike from the edge of the box was ruled offside.  It took a superb save by debutante Thader keeper Sergio to prevent the hosts opening the scoring 8 mins later, his outstretched legs deflecting a shot from Malquez around the post. 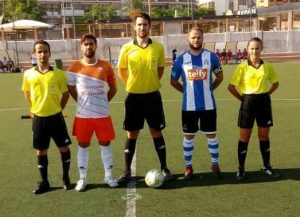 Fast forward to the last kick of the half for the next note worthy incident, a 20 yard effort by Rafa Gomez which fractionally missed the target.  So, a half which yielded no goals, no bookings and no excitement, came to an end.

At half time I wondered how I could pad out my report, then realised that hosts Alicante Uni tangerine and white kit, combined with Thaders blue and white, mirrored the match being played in UK between Blackpool and my beloved Pompey.

It took only 3 mins, before Thader took a 2nd half lead.  Alicante Uni keeper Nacho did well to parry a dangerous free kick, but could not prevent another debutante, Jorge, stroking the ball home from the rebound.

Lloyd went close to extending the lead on 56 mins, his effort fractionally too high, before Jorge executed a goal line clearance up the other end.  Local lad Rafa produced his moment of magic just after the hour mark.  From fully 25 yards, he curled the ball around the wall into the top right hand corner. 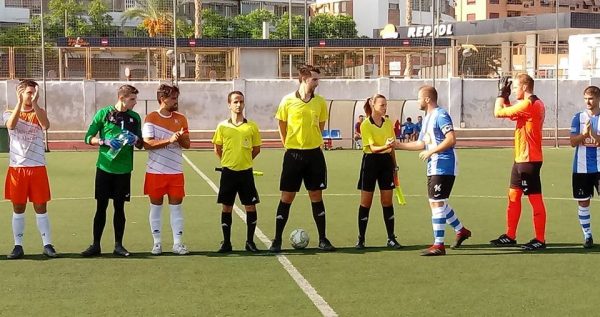 If this had been on MOTD, it would without doubt have been a candidate for goal of the month.  Almost immediately, Iborra shot over, then midway through the half, Rafa Gomez would have made it 3-0, had his goal bound shot not been cleared off the line.

Through on goal, captain Lloyd looked certain to score, but his wayward effort looked more suited to one wearing black and white stripes, than that of the mighty Thader!

Late on, Iborra should have narrowed the deficit, but once again he missed the target.  This hard fought victory was well deserved, for Thader battled for every ball, took the few chances that came their way, and in Jorge have unearthed a gem of a player.  Although subdued early on, giant ref Beneite (he’s got to be at least 7 foot tall!) chose to book Lloyd, Rafa Gomez, Fran and Mora, plus 2 opponents, in the 2nd period.

On Sunday 8 September, ko 1130, Thader play their first home league match of the season, when relegated Rayo Ibense are the visitors.