After 9 hours of meetings, #Ryanair rejects the mediation proposal of the General Directorate of Labour and the #Ryanair Strikes will go ahead. DGT say “We regret that Ryanair, who had requested mediation from the DGT, has not made a single proposal to call off the # strikes.”

However Ryanair hopes that the strike scheduled for this weekend will not mean the cancellation of more than eight of its more than 950 daily flights to and from Spain, both on Sunday 1 and Monday 2 September, according to the EFE agency.

Ryanair has contacted affected customers – by email and SMS – offering options, to either move their flight free of charge, or be issued a full refund.

If you are due to fly on September 1 or 2, and have not been contacted by the airline, then your flight should be going ahead.

The strike action comes in the wake of a dispute, between Ryanair and Unions, over closures of bases in the Canary Islands, as reported by the Costa Blanca and Costa Calida Leader.Ryanair said in a statement that the strikes would not change this.

The airline blamed delays in delivery of Boeing Max aircraft as one of the reasons why the bases made a loss. Ryanair announced it was still open to talks with the two Unions – in a bid to avoid further strike action. Union SEPLA have threatened walkouts on Septembrr 19, 20, 22, 27 and 29.

The Union say it would not go ahead with threatened walkouts – if an agreement with Ryanair could still be reached.

The dispute, unrelated to that of USO and SITCPLA, is over the potential closures in Tenerife and Girona, which would lead to cutbacks – and potential dismissals of pilots. 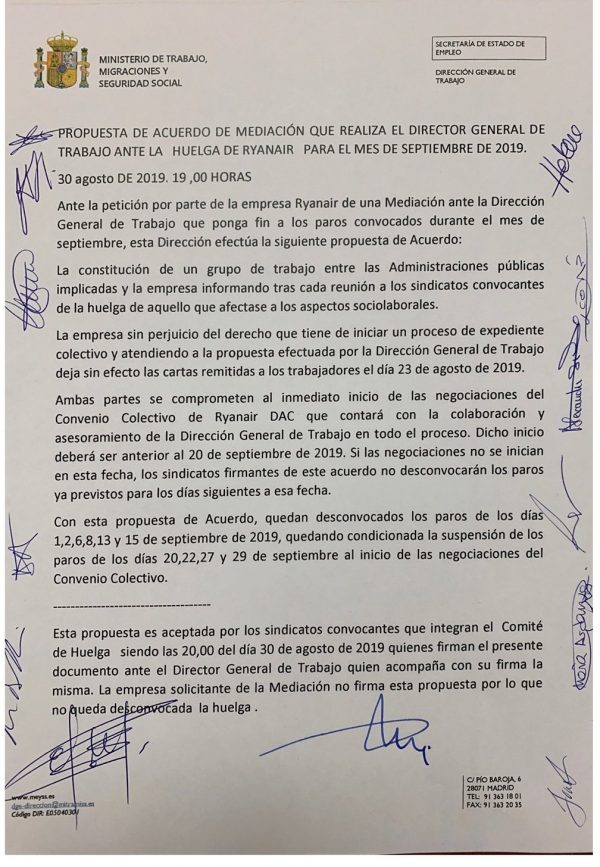