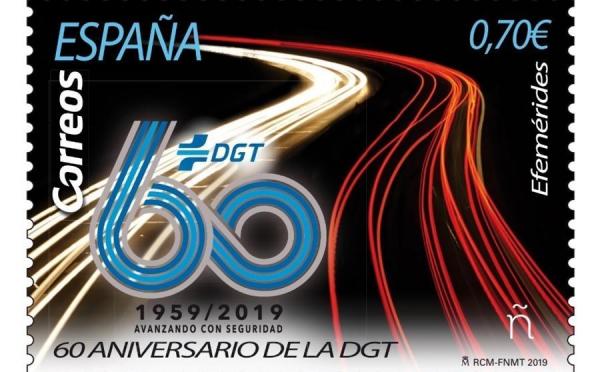 The stamp, which was presented this week to the Director General of Traffic, Pere Navarro by the President of Correos, Juan Manuel Serrano, features the DGT logo and is symbolic of the road network.

The stamp is based on a solid black background, on which several lines extend as wakes that simulate the roads, which thanks to the varnish applied on the stamp, have phosphorescent tones. The number 60 is also drawn with lines representing these roads where more than 40 million vehicles travel each year.

The stamp is a limited edition and will only have a print run of 180,000 copies, although you can buy one for the standard price of 0.70 euro per unit, according to Correos.

Correos has been investigating improvements to their collaboration with the DGT. Since the start of 2018, the post office was the designated collection point for the new eco-labels for vehicles, and since June of this year it is now possible for replacement driving licence applications to be processed through many main post offices.

Under the agreement, since 24 June, 2,400 post offices across the country can process applications for replacement licences in the event of loss, damage or deterioration.

Since 1959, the DGT has been tasked with ensuring safety on Spanish roads. As indicated by the motto of its 60th anniversary, ‘Advancing with Safety’, during the six decades, the DGT has been adapting to the needs of traffic in Spain, always ensuring the safety of drivers, pedestrians and other road users.