The Audi Sport R8 LMS Cup quartet showed steady pace in the qualifying sessions ahead of the race, qualifying P10 in the AM-Class and 66th place overall in a record-breaking grid of 72 cars.

The race started behind the safety car, as a result of heavy rain at the Belgium circuit, and kicked off in wrong foot for the #80. Haryanto was the first driver caught out by the trick conditions, sliding off at Raidillon, making heavy contact with the barriers. Even with a broken front-left wheel and no rear wing, the Indonesian driver was able to return the car back to the pits where the team set about repairing the rear and the front left corner. 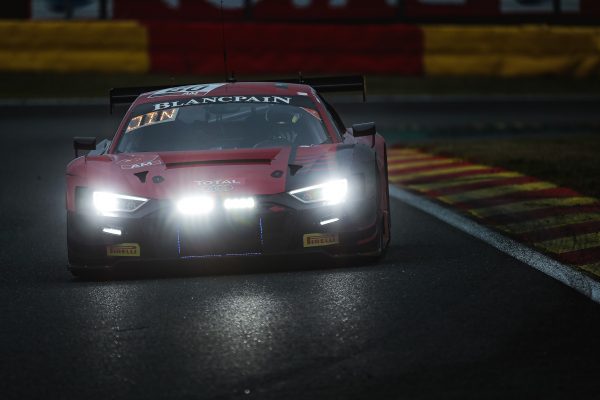 The car was back in the race before the end of the second hour mark and ran smoothly in tricky conditions until the seventh hour, when Haryanto found himself back in the barriers. Following a 20-minute repair, the red R8 LMS GT3 “Evo” was sent back again into the night.

After a week of clear skies and high temperatures at the Belgian venue, bad weather arrived in force on the weekend. A long caution period was called at the halfway point due to the rainy and foggy conditions, eventually prompting a red flag. The race had been interrupted for almost six hours, restarting at 11.30am at the world-famous Spa-Francorchamps circuit in the Ardennes Forest.

In the last four hours of the race the four-man Audi Sport R8 LMS Cup squad decided to not take any risk on tricky surface conditions, bringing the car home safely in a steady 10th place in the AM Cup as the second highest finishing all-FIA Bronze entry.

Ingo Matter, Team Director of Absolute Racing, said: “All in all, it was a good result for the team and a brilliant performance from our drivers and pit crew. It turned out to be a very eventful race as lady luck was certainly not on our side. We had experienced the full might of a 24-hour race with two crashes, but the team had the car turned around twice and back out on track with minimal time lost.

Our Gentleman Drivers performed very well under the pressure of this high-class field and changing weather conditions. We are very happy to have finished the race. It was a great experience for the whole team and the drivers. Thank you Spa-Francorchamps and SRO for putting on this great event. Now, we shift our attention to next weekend’s Blancpain GT Series Asia round in Korea.”

Michael Schneider, Team Manager of Absolute Racing, added: “The 24 hours of Spa was a great experience for our drivers, but also for the whole team. We had the chance to compete against the best teams and drivers in GT racing under incredibly difficult weather conditions. The most important for us was to finish this prestigious race and fought hard to make it happen.”

The team is now travelling to South Korea, where it will take part in the Blancpain GT Series Asia at the Korea International Circuit from August 2 to 4.

All Chinese line-up for Absolute Racing at Suzuka