What a difference a week makes. Last time out a La Manga we had a full field plus guests but only 29 members signed up to play Alicante this week and of those, two were posted as MIA (Missing In Alicante) after failing to make the start line.

We assume Gerald and Noel are in the holding pattern at El Plantio awaiting our arrival there next week. Which is a shame, as they missed the chance to play a track in pleasingly good shape for the time of year and in temperatures which have yet to reach their blistering summer peak.

Those who did find the course – with or without the aid of Google Maps or a satnav – generally took good advantage of the layout and a couple absolutely revelled in it. In Bronze, Neil Oliver took third with 32 points, followed in second place by Alan Macdonald with 34 points. The division winner for the second week in a row, and with an excellent tally of 41 points was Ralph Tilbrook. Well played, sir.

Silver division was a closer run affair with Norman Cahill nipping in to third on countback with 33 points. Kyrre Skarsmoen scored one better to secure second, leaving Chris Wren to shine in the top spot with a very tidy 36 points. 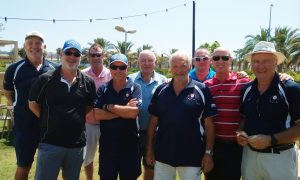 One 3-ball in Gold succeeded in snaffling an award each, which was pretty good going. John Osborne and Phil de Lacy finished third and second respectively with 33 and 34 points. At the other end of the scoreboard, Mike Greatorex propped up the field with a few less but after a 12-week layoff from the game was oddly happy to leave with the Abacus winner’s wine.

However, at the top of the pile and richly deserving a paragraph all to himself, Dave Allardice was our other consecutive week winner with an outstanding score of 42 points. Not only did he trounce the division and leave Ralph wondering how his 41 points still wasn’t enough to snag the overall bragging rights, Dave also took three of the five Nearest the Pin prizes awarded and capped that by making the birdie putt on all three greens. It’s probably fair to assume he won’t be playing off 13 next time out!

The other nearies went to John Osborne and Kyrre Skarsmoen and we thank our sponsors for the NTPs and the Abacus, Mick from the Property Shop and Mike from Mike’s IPTV for providing the prizes.

Next week we’re at El Plantio and there are still places on the start sheet.

To find out more visit our website www.smgs.org or give our Captain, Tony Smal, a call on 639129223. Following El Plantio, we’re at Vistabella and Hacienda Riquelme and we would welcome guests at each event.