“Thank you all – but I am the one who should be giving thanks” – Los Montesinos Mayor José Butron.

THE Mayor of Los Montesinos, Alicante, José Manuel Butron has thanked the people for their overwhelming support in the recent elections.

The result of the Senate elections in Los Montesinos saw the PSOE imposed with almost 35% of the votes – significantly improving the results of 2016.

“I would like to thank you all – but I am the one who should be giving thanks,” said Mayor José Butron.

After winning the elections, Mayor Butron said: “It is one of the happiest days of my life.”

Mayor Butron added: “We will have a Government in our community – and in our country – a Government of progress and social justice. Thanks for your support.

“It is one step forward – we will leave our children and future generations a better life. A more human world.

The Comunitat Valencia/Alicante/Los Montesinos PSOE elections had 32.61% of the votes.

It being the PSOE highest votes in Congress, Senate and Valencian Courts.

Los Montesinos Mayor Butron also presented the Socialist candidacy in April – with a group of men and women.

“We are proud to have a group of men and women, who combine experience, youth, ideas and commitment to the municipality,” said Mayor Butron. 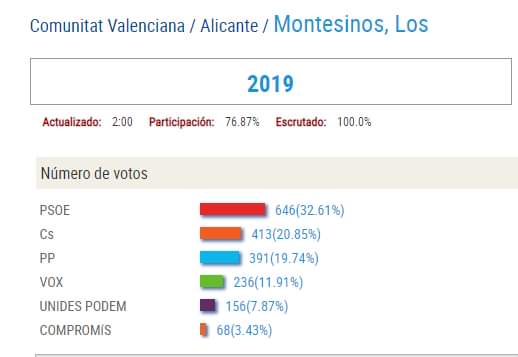