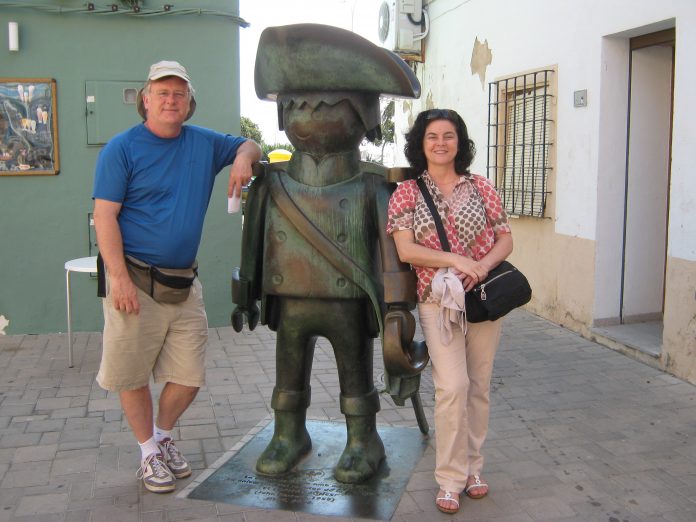 The statistics can lie to us or deceive us, but the facts are undeniable; international film making in Spain has never been better.

‘Movies Made in Spain’ was a book published by teacher and writer Bob Yareham in 2016, detailing where over 700 English language films were shot in Spain since the 1920s.

Two years later Bob, who has worked in Valencia since 1981, has had to update the book and has reissued the 600 plus page electronic version with the new title ‘Silver Screen Spain’, a reference to a website he created.

The new version has more than 800 films, mostly due to an intense increase in filming during the current decade, but also fruit of deeper investigation showing some filming in Spain in, for example, Gregory Peck’s Snows of Kilimanjaro.

The 70s brought another 122, but then came a decline, with only 83 in the 80s, due almost certainly to the fact that with the death of Franco, the Spanish army was no longer for rent, and many mass battle scenes such as the final battle of Spartacus, became much more expensive to make.

Worse was to come, with only 56 films in the 90s, although a recovery was on its way in the new millennium, whose first decade saw 152 productions.

And the present decade? So far, and it hasn’t finished yet, there are 215 films made or in production. A spectacular increase.

So, which films stand out among so many? In the 50s we could witness Elizabeth Taylor running up that hill towards the castle of Begur, Girona, in Suddenly Last Summer, and the first English language western made in Spain, not in Almeria but in the Comunidad de Madrid, where Kenneth More parodied the genre in The Sheriff of Fractured Jaw.

In the 60s Doctor Zhivago showed us the versatility of the scenery of Soria, while in Circus World, John Wayne’s only Spanish excursion, scenes from Barcelona, Madrid, Toledo or Chinchón represented several European countries.

In the 70s Dustin Hoffman and Steve McQueen, marched disconsolately through the streets of Hondarribia, towards their exile in Papillon; and the magnificent Audrey Hepburn accompanied Sean Connery in the poignant Richard Lester film Robin and Marian, where Medieval Merrie England was represented by Navarra.

Although the 80s saw a decline in English language films made in Spain, American English made headway as Steven Spielberg undertook his two Spanish adventures; Empire of the Sun and Indiana Jones and the Last Crusade, filmed in great part in Andalucia.

In the 90s international filming bottomed out, although Johnny Depp reached Toledo for scenes from The Ninth Gate, written by Arturo Pérez Reverte, and Columbus scored a double with 1492 and The Discovery, by Ridley Scott y John Glenn respectively, shot all over Spain.

The new millennium saw an improvement, above all in Catalonia, where two celebrated films were shot. The Perfume turned the streets of Barcelona into Paris, while Girona became Provence, as Woody Allen show-cased Gaudí’s city in Vicky, Christina, Barcelona.

Allen’s film helped increase American interest in visiting Barcelona, in the same way that Martin Sheen’s The Way multiplied by 5 the number of Americans who walked the Camino de Santiago following the release of the film.

In the current decade we are witnessing an increase in productions that would normally be considered all-American. The latest instalments of Rambo and Terminator, as well as spin offs such as Han Solo, ‘cashing in’ films like Blade Runner 2049, or even super-hero stories such as Wonder Woman 1984 have or are all being made in Spain.

More and more Spanish directors, actors and technicians are benefitting from the surge in productions in Spain, not to mention the hotels and suppliers who have a field day when Hollywood hits town.

However, another area where Spain has been slow to move is set-jetting (cinema tourism). Although a lot of interest has been shown by set-jetters visiting Game of Thrones locations in Spain, Croatia has handled it much better.

In January 2019 the Spanish tourism fair FITUR has announced a special section dedicated to film tourism, so maybe things are looking up, although in the past the Spanish authorities have shown short-sightedness when presented with opportunities.

In Trebujena, Cádiz, for example, they demolished Spielberg’s Japanese POW camp from Empire of the Sun instead of turning it into a visitors’ attraction, and in Denia, where Robert Stack portrayed the American admiral in John Paul Jones, the monument erected 50 years later was a perfect example of how to ruin a perfectly attractive little square with a tasteless, unthinking monstrosity. Photo attached.

Silver Screen Spain the e-book is published in Valencia by Obrapropia: