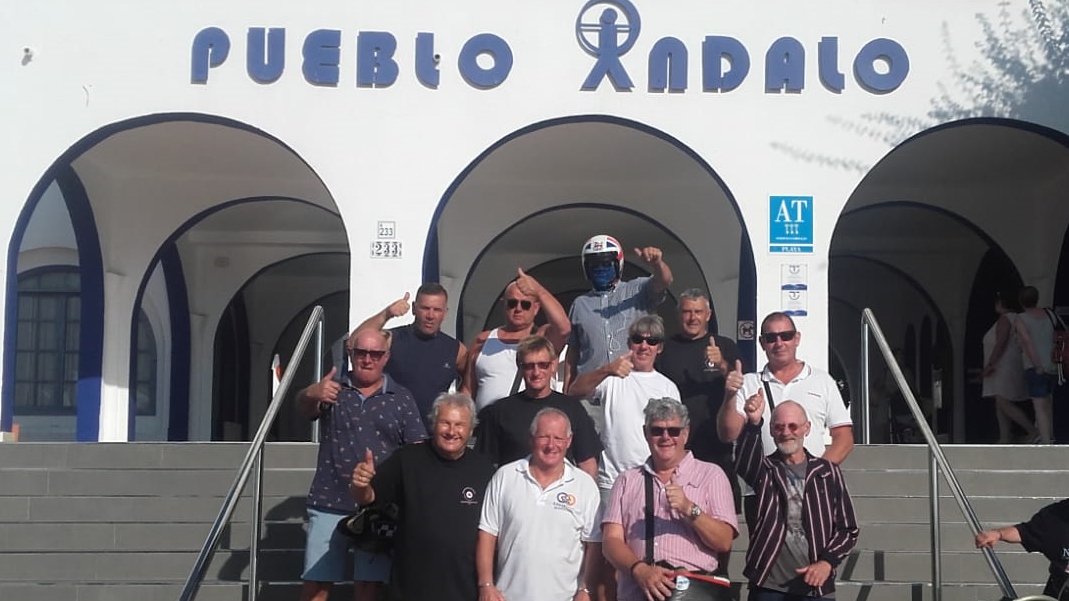 There are two Mojacars:  the first, and best known is a small, beautiful  Almerian town perched high on a hill complete with white-washed houses, shops, bars and restaurants amid tiny winding streets. In addition a  ten-minute drive down to the sea awaits the other Mojacar – this coastal ‘resort’ completes the holiday picture with golden sands, water-sports, hotels, apartments, shops, bars & restaurants.

Our first night was spent recovering from the highly-eventful journey. From our new resort home by the sea, after huge breakfasts the next day a local ride was enjoyed along the coast before winding up to explore the Old Town, parking on the outskirts. The mood rapidly became relaxed as CBS and Mojacar Old Town soon became friends.

Day Three was an amazing biggie. Our leader ‘Peco’ Pete revealed a Wild West fascination and led the boys on a punishing ride inland to ‘Fort Bravo’, arriving at high noon. This is a Spaghetti Western cowboy town built in the middle of nowhere. From the main road the possee descended bumpily down a dusty old river bed before climbing sharply up a hill. A quick haggle at the entrance gate and the CBS Vesparados rode into town. 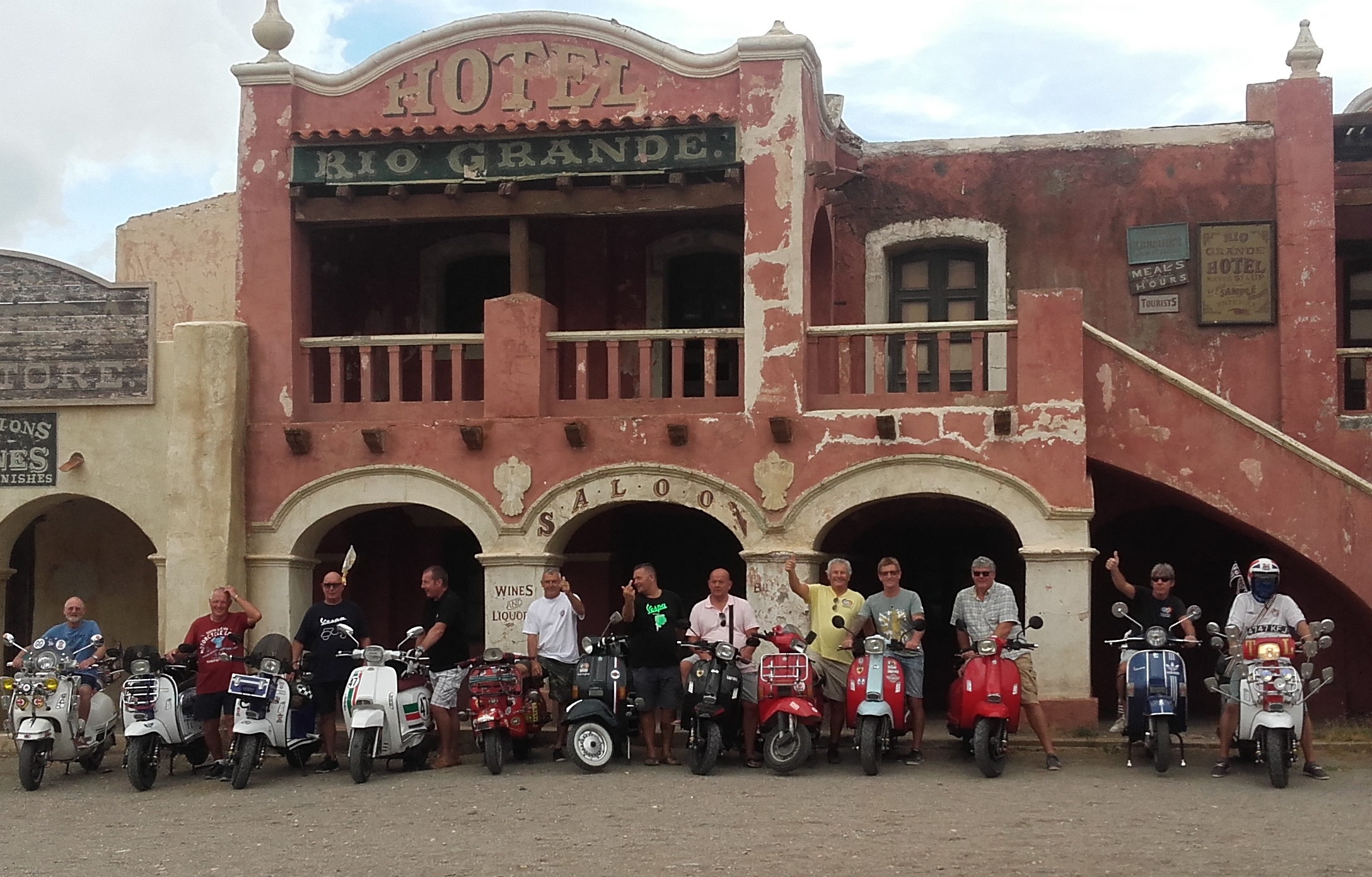 Dismounting, the Dirty Dozen headed for the noisy packed saloon from where screams and gunfire could be heard. Here wild women were dancing on the bar, and violent card games and gunfights between four Iberian cowboys were the order of the day.  The visiting cowboys then proceeded to explore all the many Western buildings around, then back to the saloon, outside this time, as another  gunfight on horseback raged – amid a few large drops of rain…

Soon it was time to saddle up and head back to Boot Camp. Riding back down the sharp slope we strangely encountered a line of stationary cars  – why? We soon found out: that dry little river bed we came in on had turned into a muddy brown torrent, twenty feet at least across, looking at least a foot deep, cutting us off nicely from home. Earlier, high up in them ‘thar hills the rain had really come down, and was doing what water does – going downhill fast…. It was dodgy even for cars – now what? Eventually the fast brown flow seemed to be subsiding slowly when a French campervan  suddenly broke ranks, and amid cheering slowly safely crossed the great divide. A few cars then followed. -but what will we do?

Cometh the hour, cometh the man. Dave ‘Super-Spanner’ Solan was heard to mutter ’Fook this’ in broad Mancunian and revved up his 1965 Vespa 150 Sprint. Steadily through went Cool Hand Luke, even casually lifting his feet high to avoid getting them wet. Huge cheers from everyone, including the remaining car owners, deep respect.

Now we all proceeded to cross the Brown Sea one by one to great applause, each later admitting to huge doubts and squeaky bums as to their chances of crossing the water without falling in. But, praise the Lord we were all safely delivered, and Pete’s twelve disciples set off for home, again armed with much fun and frolics to drink over and relish that evening.

The third and final full day was to ‘Keep The Faith’, so that morning CBS met up with the local yokels, i.e. ‘The Mojacar Soul and Scooter group ‘. Andy and Michelle, Tony and Jackie, and Graham were a friendly crowd who took us on a great run inland. ‘MSS’ then showed us how to arrive in Mojacar town on two wheels, just by-passing those irritating car-blocking metal railings straight up to the little central square.

You smile at everyone, and even make friends with the local friendly policeman, who even allowed us to take photos of him suitably adorned with a CBS group sticker (we always leave our mark). Our new MSS friends took us up to a fantastic open-air restaurant with wonderful 360 degree views to die for, and we dined well together. Was our meet-and-greet day over? No sir, our new friends had laid on a disco evening with our kind of music at the Al-Oha bar down by the sea, conveniently staggering distance from our comfortable accommodation.

A great last evening was enjoyed, all thanks the lads and lasses from Mojacar Soul and Scooter group. Oh yes, we Kept The Faith…

The weather had been brilliant, and the last day dawned fair once more. So with heavy hearts, full tanks and bellies CBS set off back home.

This time the ride was much less eventful, lovely scenery as we hugged the coast before joining the quietest toll-heavy motorway in the world back to Cartagena, so armed once more with a whole host of stories to recount the Torrevieja Twelve returned home safely to our loved ones, – another great CBS tour. Now, about next year…