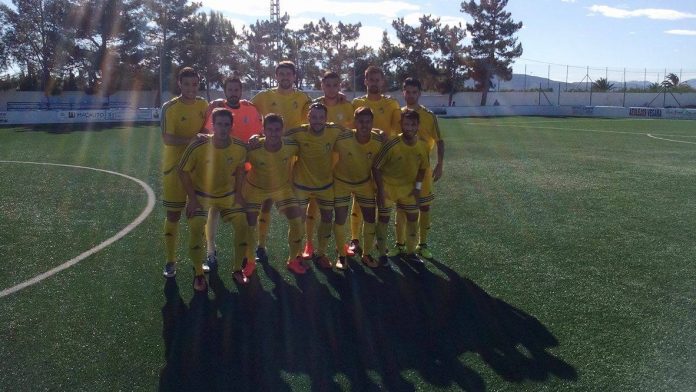 There were chances galore in this Preferente fixture at Redovan municipal stadium, but alas not one was taken, as Torry added another important point to their season’s tally.  Going into this match in 2nd spot, they must have fancied their chances against lowly Redovan, but unfortunately we’ve heard this on numerous occasions already this season, only for the form book to be ripped up.

Pedreno was forced to replace last week’s goal scorer Marwane, a groin strain necessitated a recall for Flores into attack, whilst Tenza replaced Pablo who dropped to the bench.

Redovan could easily have been ahead from their first attack, but when through on goal, Joaquin shot wide of keeper Buyo’s near post.  Beltran brought off an important save from Pablo on 7 mins, who flicked a goalbound effort over for a corner to Torry.  That man Pablo again came to his sides rescue on 25 mins, this time acrobatically palming away a scorcher from Ramiro.

It was now all Torry, creating chances at will, although both Beltran and Vicente should have shown more composure instead of blasting good opportunities into the heavens.  Those missed chances almost came back to haunt Torry, for on 32 mins a blistering 25 yards free kick by Joaquin required a breath taking diving save by Buyo to keep his goal intact, then from the rebound a Micro shot struck the bar, followed by Edu placing his effort into the side netting.

On the stroke of half time, a sweet floated free kick by Ramiro found Walid in space, but with the goal at his mercy he too was guilty of squandering yet another glorious chance.

Both teams made their intentions clear early in the 2nd half, that of more end to end action.  A well worked move by Walid and Manu, resulted in Ramiro firing over from 20 yards.  Back came the hosts, Guylle’s low drive required Buyo to make a comfortable save, then Edu shot wide from the edge of the box.

A Torry corner mid way through the 2nd half found the head of Walid, but once again the giant defender failed to hit the target.  Next it was Beltran’s turn, although his shot was cleared off the line by a Redovan defender.  Guylle wasted another chance for the hosts, as did both Borja, Tenza, and for the umpteenth time Walid, for Torry.

Torry manager Pedreno must make clinical shooting at goal his number 1 priority, if his dream of an immediate return to div 3 football is to become a reality, or his players poor finishing will inevitably cost his side dearly.

It’s back to Vicente Garcia on Sun 12 Nov, when Torry take on mid table Petrelense.  Ko is pencilled in for 5pm, although it’s highly recommended that the official club web site is visited as times can (and often do) change during the week.

Pat Stewart wishes to thank all who attended the recent funeral for husband Alex, and has also announced that she WILL be continuing as president of the Torry Army.