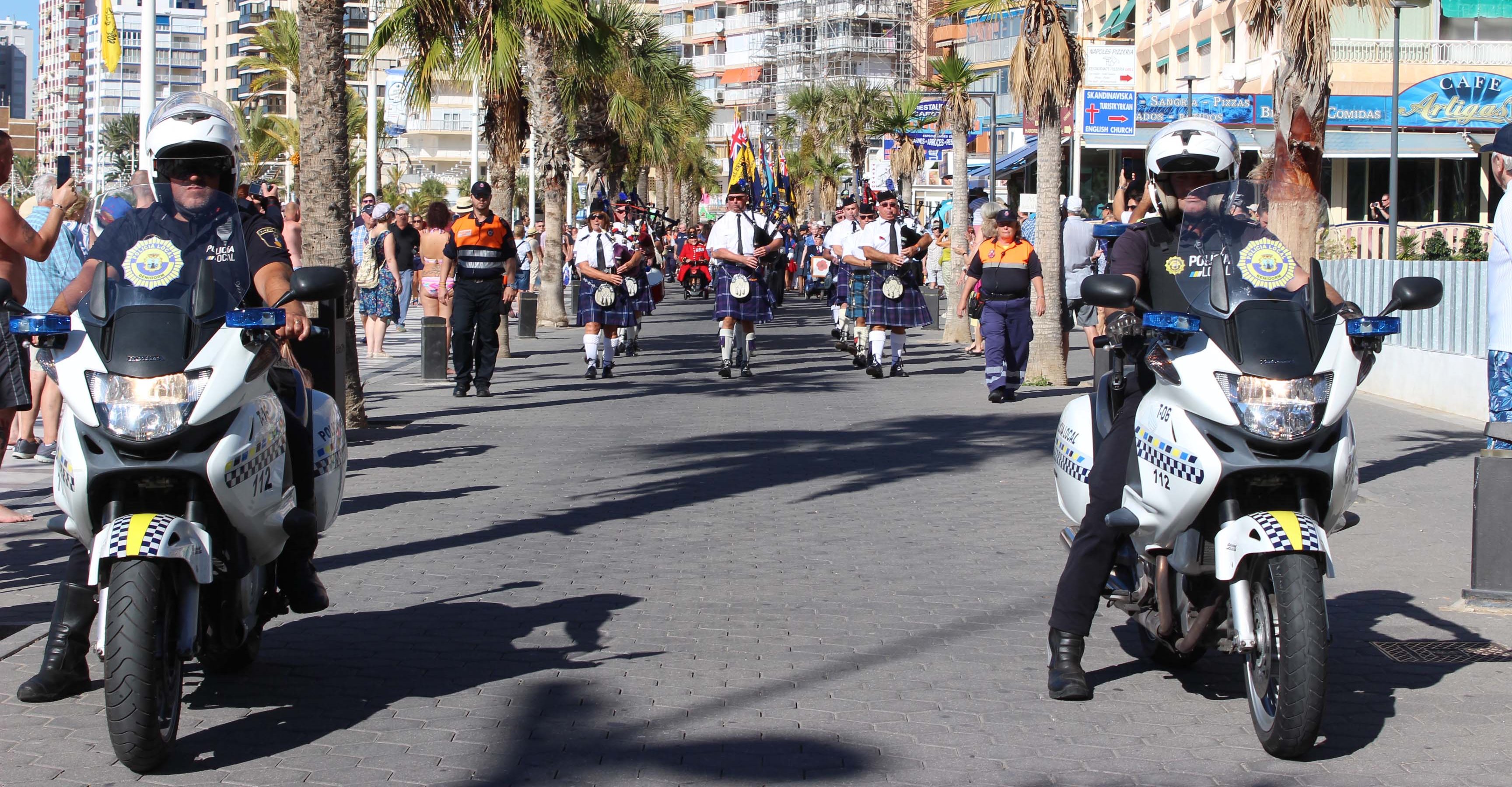 Although inaugurated in the UK 24 hours earlier the Poppy Appeal in Spain got underway in Benidorm last Friday when over 300 veterans joined local residents and holidaymakers on the Rincon de Loix, just off the Levante Beach, where the appeal was launched amid the pomp and ceremony that the occasion so rightly deserved.

Once again the Torrevieja Pipes and Drums marched out along the Levante promenade ahead of the veterans of all nationalities and services including serving and former members of the Army, the RNA, RAAFA and the RMA.

Resplendent in their red tunics, the parade also included two regulars from the Royal Hospital in Chelsea, Wayne Campbell MBE and Skippy Teasdale who, as they have done so on many previous occasions, once again made the journey to Benidorm from their Royal Hospital Chelsea home.

As the participants stepped out along the short promenade, behind the rousing skirl of the bagpipes, something not too often heard in the popular holiday resort, it was a sight that was enthusiastically applauded by the many spectators that lined the route.

Caught up in the occasion, residents and holidaymakers alike stopped to show their support as the immaculately dressed Standard Bearers, from across the North East of Spain, marched along the Avenida Madrid, demonstrating their enormous pride as they represented the British Military Charity.

The standard bearers and marchers formed up in front of the stage at the Rincon de Loix where the Launch Officials took over proceedings.  District Chairman, Don Cubbon, was joined by the Mayor of Benidorm, Toni Perez Perez, the British Vice Consul in Alicante, Elizabeth Bell MBE, Una Cleminson, the National Vice Chairperson of the RBL and the Poppy Appeal coordinator Robin Hargreave.

Following the last post, 2 minutes silence and reveille, Chairman Don Cubbon thanked the mayor and residents of Benidorm for once again hosting the event. He thanked also the marchers, the Pipes and Drums, and special guests from the Royal Hospital in Chelsea Wayne Campbell BEM and Skippy Teasdale, for ensuring that the launch was a truly memorable day.

After speaking of the formation and the aims of the RBL he said how we all stand together in solidarity with our Spanish colleagues and friends against the tragic events in Barcelona and elsewhere in the world.

He asked those present to donate generously to the appeal and in so doing to wear their poppy with pride in collective remembrance of the injured and the fallen.

Una Cleminson spoke of the RBL beneficiaries and the weekly spend in their support of £1.2 million. She said that the 2016 appeal had raised £46.6 million, every penny of which had been spent on welfare.

Don Cubbon then took the opportunity to present the mayor of Benidorm  with a certificate of appreciation after which Snr Perez thanked the Royal British Legion for the work that they carry out here in Spain and across the world. He said how delighted he was personally to support the charity, by once again hosting the launch of the Poppy Appeal in Benidorm

He added that the Royal British Legion “is a role model” and that the charity can always count on the support and encouragement of his council.

The ceremony ended with rapturous applause as the Torrevieja Pipes and Drums and the massed Standard Bearers marched off  before hordes of spectators, both English and Spanish, descended on Skippy and Wayne, to pose for photographs.