A large convoy of travelling supporters, left Los Montesinos, and predictably got lost on their way to Rafal!!  Rafal have a decent stadium although a smallish playing surface, with a covered stand which soon became almost full with over 300 supporters, including at least 150 Los Montesinos fans, creating a great atmosphere.

Initially the home team seemed to have the advantage, being used to their relatively small ground. However, as the game went on, CD Montesinos came more and more into the game and it was no surprise when, after 20 minutes, following a long ball into the Rafal half, a Manu Sanchez shot was parried by the goalie into the waiting chest of Carlos Ventura, who knocked the ball in to give “Monte” the lead. 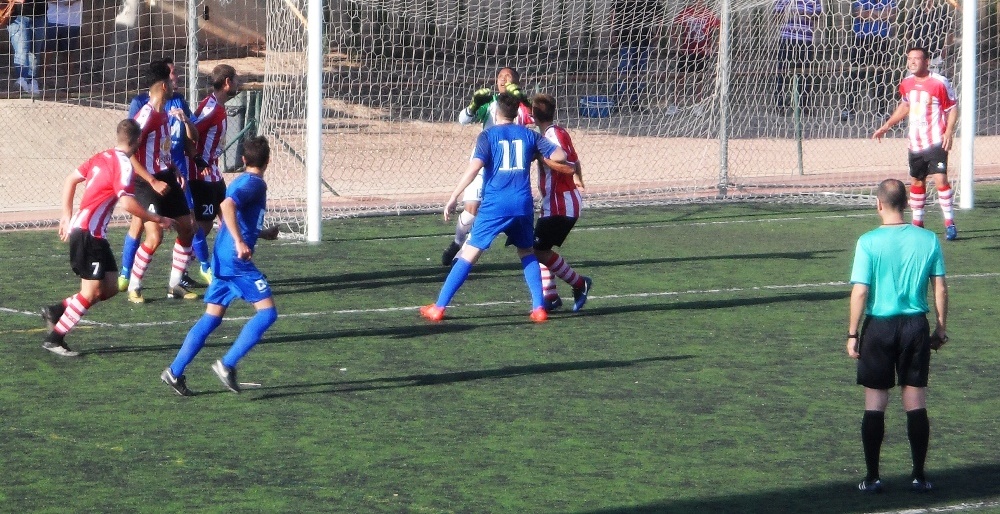 It was all Monte now and both Vazquinho (who was given his usual hash treatment by his opponents) and then Carlos Ventura who shot against the base of the home post, went close. However, somewhat against the run of play, in the 35th minute, Rafal were awarded a dubious penalty to level the score at 1 – 1 and just before the end of the first half, Rafal took the lead for the first time to go into the break 2-1 ahead.

After a slow start to the second half, Manager brought made a double substitution which appeared to add urgency to the Montesinos play and both Guirao, with a thunderous shot against the cross bar and Ventura went close again.

But despite their ever increasing domination, CD Montesinos had to wait until the 79th minute when Carlos Ventura scored his second of the game to level the scores with a wonderful solo goal 2 – 2.  The final ten minutes were tension filled as both sides tried to get a winner and then, to add even more drama to the proceedings, Montesinos forward Vazquinho was brought down in the Rafal area and was awarded a clear penalty deep into added time. Up stepped German, who had missed two penalties already this season and much to the dismay of the large travelling contingent, proceeded to miss this one as well as the referee blew the final whistle in a very entertaining game of football.

It has to be said that the small field assisted the Rafal team, forever sending long balls up the field, at times creating a no-man’s-land in the centre of the field. I have never seen so many throw-ins going directly into the goalmouth area. But Monte responded to this admirably, adjusting their way of play.

It also has to be said that this game produced many of the things which irritate an average football supporter, a visually impaired, inept referee, totally ignoring or not seeing what large sections of the crowd clearly see. Also, the actions of many of the players leave a lot to be desired, far too many fouls, and pretence of injury. To the credit of the Monte players, no-one opened their mouths to the ref’, whereas the Rafal players were constantly in his face. Several Rafal players were booked, and they were lucky not to have a player sent off, when having been awarded a penalty and Vaz still lying on the ground, a cowardly Rafal player just struck him Vaz on the head, resulting not even an admonishment from the ref’.

Next week, CD Montesinos are at home against the runaway league leaders, UD Horadada, who are likely to bring a large travelling contingent. The game will be played on Sunday, 22nd October at the Campo de Futbol in Los Montesinos with a 5.00pm kick off.