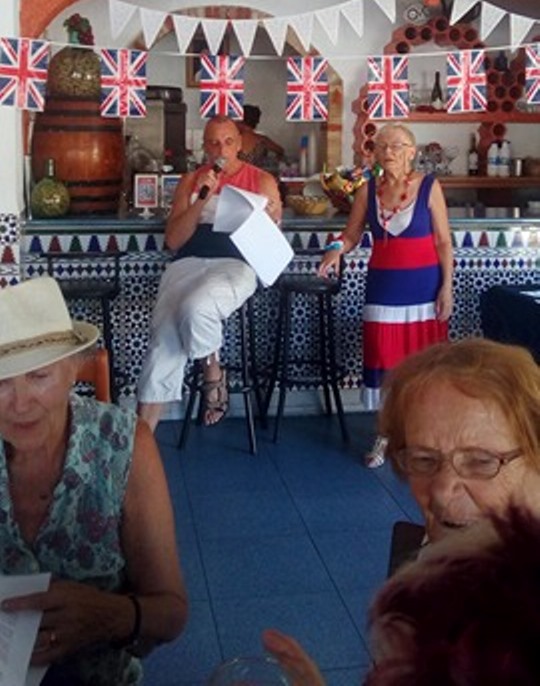 Another success for “Reach Out” in the form of a cockney themed afternoon “Cockney Capers” at the Marina Bar on Fri 29th Sept organised by David & Lorraine Whitney of Reach Out Shop 2  Calle dona Sinforosa 8,Torrevieja.

The afternoon began with a delicious lunch of typical (the photo shows David & Lorraine in the throes of the sing song) Pie, Mash and Liquor followed by pud. A Quiz, Tombola, Raffle, “Eastenders” Comedy sketch and Raffle which all contributed to the fun afternoon culminating in a good old ‘sing song’ of old favourites like “Down at the Old Bull and Bush”.

A ‘not to be sniffed at’ 280 Euros was raised at the event for the charity.

David and Lorraine are now in the throes of arranging the next fund raising event which will be their very popular FREE “Fashion Show” which will take place, again at the Marina Bar on Friday 27th.October at 2pm.

Those who have been to the Fashion Show’s before will know what to expect and hopefully will once again grab a few bargains on the day.

New Orihuela councillor introduces herself to the coast

Rojales Pantome Group 1st get together after lockdown.