The SAMM Spring Series race program finished in early July but, as there is no monthly meeting in August, the results were not announced until the meeting on September 13th.

Due to reasons beyond control only 7 races were completed, not 16 as planned. It was decided by the Race Committee that just 1 result would be dropped to determine the final places. SAMM racing is governed by the PY handicap system and based on the low points system 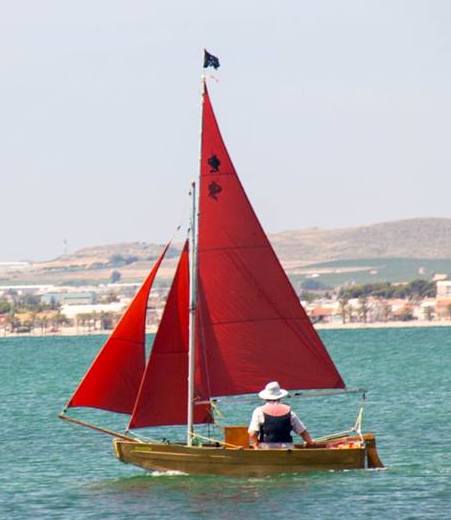 In third place was Mick Burgess in his Sea Hopper ‘Rosita’ the smallest and prettiest boat in the fleet, with 37 points, a brilliant achievement by Mick. Second was the Sailfish 18 ‘Sirocco’, with 34 points. Sirocco had been sailed by different crews during the season so the trophy was accepted by Julian Perring. First was John Down in his RS Quba ‘Lola’, with 31.75 points.

Sunday 24th September, 10am at CTD and the competitors and officials arrive for the second race day of SAMM’s Autumn Season Handicap Series, pity the wind did not decide join them till much later so the first race start had to be delayed until 12.15pm.

With more members back in Spain after their summer away, 8 boats containing 12 crew total got away with only a little shouting of Starboard, get out of the b++++y way, etc.  With the gentle 4 knot breeze, for the first time in a good few years, the race officer had set a short, figure of eight course which called for some careful manoeuvring and adhesion to the rules where the route crossed.

The single hander’s of Tug Wilson and Julian Singleton were soon battling for the lead as they drew away from the rest of the fleet and they completed the first three laps 5, 1 and 2 seconds apart but, Tug opened the lead slightly on the last lap to cross the line 14 seconds ahead. Great, tight, racing by two good sailors. All the other boats completed the race within 50 minutes as the wind had increased to 8 knots at the end.

Seven boats started the second race in winds that had increased to 12 to 15 knots. Unfortunately ‘Mistral’ had its’ forestay snap at the first mark and was forced to retire. All the other boats completed the first lap within a minute of each other and the 7 dinghies remained in close contention throughout the race until the Topaz retired after capsizing following a collision during lap 3. The larger, slower ‘Sirocco’ gradually dropped back but still performed extremely well, as can be seen from the result.

Final results after applying the handicaps were:-

Next race day October 1st, Pursuit racing, then ever Sunday in October.