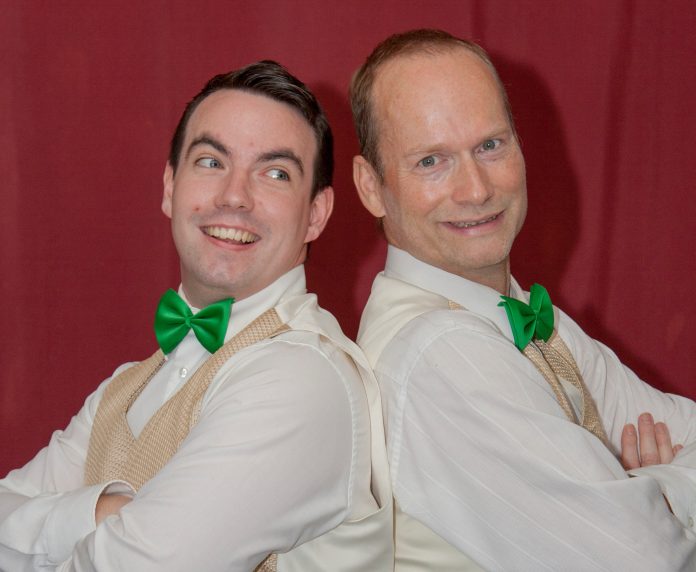 Following on from their sell-out summer musical “Mack & Mabel” STUDIO32 are now rehearsing their winter show, “White Christmas”. Based on that perennial Christmas favourite Irving Berlin’s film is brought to the Costa Blanca in a wonderful stage adaptation. The show contains some all-time classic songs including “Blue Skies”, “Sisters”, and of course the Bing Crosby title number “White Christmas”.

The two lead roles are played by Luke Ringrose (pictured left) as Captain Bob Wallace, and Nick Morgan (pictured right) as Private Phil Davies. It’s 1954, and Bob and Phil have become famous entertainers since leaving the army at the end of the Second World War. Appearing on the Ed Sullivan Show they perform their Christmas hit number “Happy Holidays”.

A chance encounter with a female duo sets the scene for intrigue, comedy, and a great storyline. But will romance be in the air for Bob and Phil? Festive entertainment for all the family is guaranteed, so why not start Christmas off with a visit to this great show.

Show dates are Wednesday November 29th to Saturday December 2nd at the Cardenal Belluga Theatre in San Fulgencio, all performances start at 7.30pm with doors open 7pm. Reserved seating tickets are now on sale, priced at 10 euros, and can be obtained by calling 602 454 033, by emailing tickets@studiothirtytwo.org, or from the following outlets:

Tickets are sure to sell fast so be sure to get in early and book your seat!

Ways To Get More Out of The Little Things in Life

How To Find The Leading UK Online Casino Sites In 2020