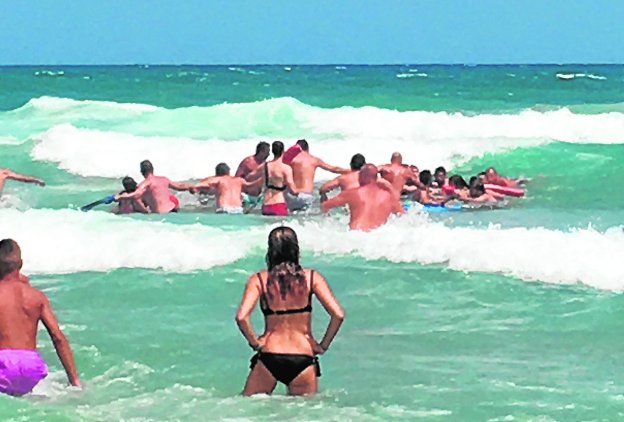 A group of bathers joined together to form a human chain yesterday, on the beach of the Amoladeras, next to the hotel Entremares in La Manga. They combined to assist four swimmers who could not get out of the water due to the strong currents and the powerful waves that were stopping them from getting back to the shore.

At the time of the incident the yellow flag was flying although shortly afterwards it was replaced by red.

Despite being urged to apply caution the four bathers decided that they would go into the sea during the early afternoon, but they quickly found themselves in difficulty less than 15 yards from the shoreline due to the strength of the surface waves and the undercurrents dragguing them into the sea just below the surface.

Fortunately, due to the quick thinking of a number of holidaymakers who were watching events unfold, and who quickly realised that the bathers were beginning to struggle, a group of about 20 quickly formed a human chain which they extended to reach the first swimmer.

“Even though we were anchored to each other I could feel the strong currents pulling at the bottom half of my body,” said Sánchez. “I was very frightened so I’m sure that the four people in trouble must have been petrified.”

Using the chain the swimmers were all able to make their way to the safety of the beach where they were able to recover from their ordeal although two of them did require medical attention.

It was a difficult day on the Costa Calida and Mar Menor, with several rescues taking place and one death which occurred on the Veneziola beach, at the far end of La Manga del Mar Menor, where an 88-year-old woman died after being pulled out of the sea.

According to a sources from the San Javier Emergencies and Civil Protection team, the lady was already unconscious when she was pulled out of the water and in spite of the attempts to resuscitate nothing could be done to save her life.