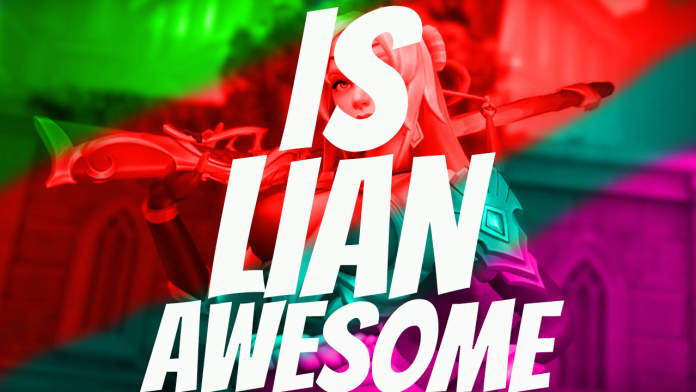 Lian is dubbed “Scion Of House Aico”. So a scion is the descendant of a noble family. Lian originally whilst in development was called “princess”. I think immediately the name Lian is far better than princess…. My reasoning for this is the name princess would set the champion for more of a female target audience and I feel that would be a great shame. Whereas the name Lian is much more general and doesn’t focus on one gender or the other.

She came out yesterday at around 6pm, and unlike many reviewers, I actually took the time to play as the champion and have been doing so since her release. She is A LOT of fun to play, and I mean loads….. She is a damage champion and she really can deal damage. Everyone of her abilities and her normal shooting abilities are damage based and can, if used right kill easily!

Her main weapon is a semi automatic “crystal” rifle that shoots every .45 second! Her main left click attack is Heirloom. This is a direct attack that deals 400 damage at medium range and can be used every .45 second. So it is extremely fast firing and I’ve found easy to kill with. Her right click ability is called Valor. Valor is again direct damage and fires a charged 400 damage shot that deals that damage to all enemies in front of Lian! This ability can be very useful indeed! Her “Q” ability is called Presence. This ability is the bread and butter of Lian and what it does is fires a charged shot at long range and deals 800 damage! Her Presence ability really is INSANE! Her Last ability is Grace which can be activated by pressing “F” or whatever you’ve bound to it! Is if used right very powerful! When using the ability, Lian quickly dodges in the direction you were facing. What happens when she finishes her roll, is whats awesome! Once finishing her roll she shoots off a shot that again deals 400 damage to whatever champion in nearest to your aim. The last ability Lian has is of course her ultimate. Named Enlightenment, this ultimate is very powerful. What it does is “channels the power of your noble blood” and gains you CC immunity for 1 second while you channel a very powerful shot that passes through enemies and deals 1600 damage! Also if you kill an enemy with Enlightenment, you instantly regain 50% of your ultimate charge! If you want to see a visual version of this breakdown watch the video bellow, but I would still advise reading all this!

Lian like every other champion in Paladins has 3 Legendary cards! Although none of them are ground breaking, her default card is still good, but you do have the option to buy one that makes your normal weapon deal 10% more! If you want to see me play as Lian in a REAL macth of Paladins check the video bellow! And if you want to know more about Paladins as a whole, or just like the gameplays then subscribe to my youtube channel!

Thanks for Reading and thanks for watching!