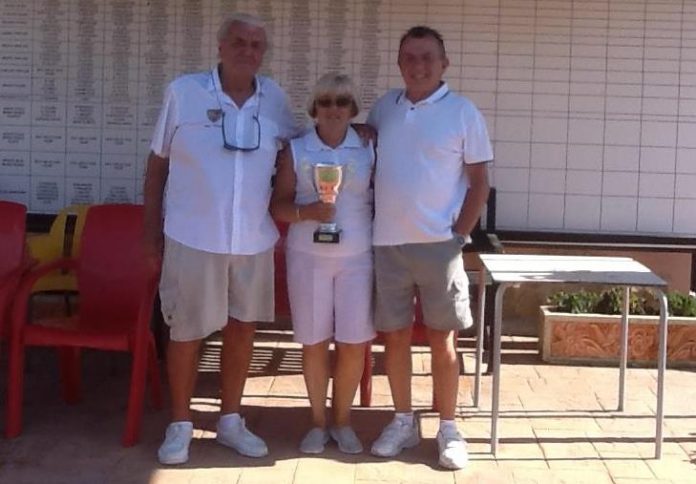 On Friday the Buckskins played host to San Luis Hercules, with a gusting breeze causing a little consternation, but we add fun and the company was great. The Buckskins took 4 rinks against Hercules 2 and also the overall shots. Richard Needham, Bob Easthope and Jim Gracie 11-16. Graham Day, Brian Harris and John Skipper 18-9.

Tuesday brought the HighJackers to the Isle and the home side won 15-3,taking 6 trips and a draw aggregate 130-60, highest winners were T Capewell R Fooks G Dyer 27-2

In the LLB Men’s 4 wood pairs versus Quesada, home result – 21 shots for.  19 shots against. Away result – 11 shots for . 22 shots against. In the South Alicante Hurricane Division, The Gladiators were at home to Quesada Lancasters. Final score – – Total shots for – 104. against 106.  Points for – 6.  Points against – 8. Winning rinks were – Sheila Stead, Dave Giddings, skip Jim Oliver. 22 shots to 13. Janet Bliss, Margaret Dewar, skip Dave Dudding. 19 shots to 15. Vic Young, Mary Lockley, skip Mel Brown. 30 shots to 21. Greenlands B. C. have vacancies for new members for the forthcoming new summer and Winter Leagues. For all enquiries please telephone Haley on 966 84 4399.

To be honest I didn’t know the 4 wood Pairs League was going on but I am glad to say I believe we could be top at the moment after beating Vistabella  4 – 1. Tom Spencer and Peter Parsons had a good draw whereas the two Dave’s, Taylor and Hadaway won 19-14. Keep it going.

On to the VCL and there we languish at the bottom but watch out.  We went over to Quesada the Numero Uno and won 8-6. We could have had another two points as Quesada only had the overall score by two shots.  Shot of the match has to be Captain Colin on the last end when his team of Lynne Armitage and Martin Butler had dropped a four on end 17 only to pick up a five with Colin’s last wood to win 25-24.  Well done to the Parsons both playing the Singles,(not together), it seemed to carry on as in real live and be together as they both won 21-16.  Last but not least came Barbara Forshaw, Mike Smith, Wendy Latham and Barry Latham who played an ex La Marina player and great friend, Fred Roberts.  In an intense game right until the last end we managed to win by just two shots.

The Pilots got well and truly blown away, away at the Vistabella Greeners green by 10 points to 4.  Our only two winners were Dave O’Sullivan, Arthur Cronk and Dave Hadaway 23-12 and Jean Tregoing, Peter Bailey and Mike Smith 14-11.  No doubt they will be fighting back next week.

I have to say it is nice think we are a caring club when you saw the Union Jack flying at half-mast on both days the tragedies happened in the UK. Thank you Alex Whyte

Following the finish of the Spanish National Championships the league matches resumed with La Siesta playing two matches in the VCL League against Greenlands Jasmines and Emerald Isle. Wins for Pat Reilly and Irene Mangan in the singles produced wins backed up by a 28-12 victory for Jack Burrell, Trish Reilly, Pat Harman and Mike Edwards in the Rinks. However, losses in the Pairs, Triples and other rinks match saw an overall loss by 120 shots to 102 to the Jasmines with La Siesta picking up 6 points to their opponents 8. Unfortunately the result against Emerald Isle was not as good with a 127 shots to 71 loss with our opponents picking up a maximum 14 points.

A great result for the Wasps in the South Alicante Spitfire Division with a 107shots to 86 win away at San Luis getting 11 points to their opponents 3. Star place goes to Irene & Dave Laverick with Brian Harman who from the 6th end never looked back from, where they picked up six shots. Dave Davies with Florence & Mike lead from the start to win convincingly whilst Ramsey Sinclair, Irene Mangan and Alex Morrice picked up a 3 and then 6 to stay ahead for the whole of the game. Joy Gardiner with Bill and Sue Jordan managed to win with the last wood of the game. Sheila Chorley, Brian Gardiner & Jean Cooper came back from 7 – 11 down to gain a 17-17 draw. Jo Elkin, George Richardson and John Taylor were behind for most of the game and then came back steadily to be 11 all on the 16th end, only to lose the last 2 ends by 1 shot each.

Disappointment for the Hornets in the Harrier Division falling to a 10-4 home loss to Country Bowls Badgers by 120 shots to 84, picking up 4 points to their opponents 10. Wins for La Siesta came from Hilary Clarke, Trish Reilly and Vic Mahomet by 22 shots to 16 whilst Ron Sheldon, Sue Mahomet and Rab Logan who were winning easily only to get stuck on unlucky 13 shots. However, having managed to get a shot to go 14-13 up they went on to win. The La Siesta Invitational Triples with sponsorship from Quesada Fish & Chips took place last weekend with semi-finals seeing two La Siesta Triples facing each other in one half of the draw whilst in the other half two Monte Mar teams met each other. The semi Final losers for La Siesta were Harold Charleton, Sue Mahomet and John Taylor beaten in a close match by Dave Davies with Mike and Florence Edwards. The final was an exciting match with Bill Young for Montemar pulling out a great win on the last end for him and his partners Jean and Don.(see picture of winners below) 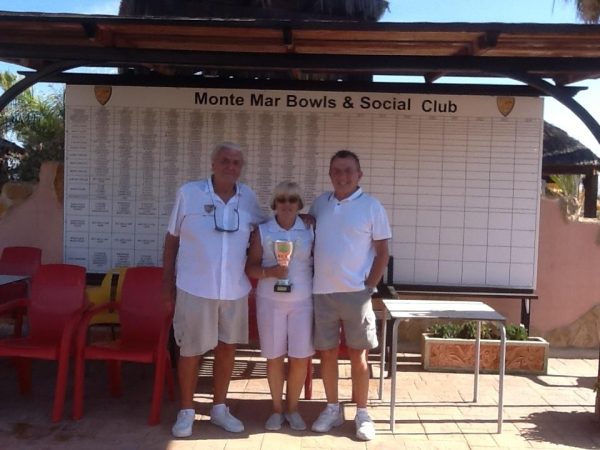 We are still looking for new members to join us for the 2017/18 winter season. We are aiming to enter an extra team in the leagues this year. With 4 teams there should be plenty of games for everyone. We welcome all bowlers, from the most experienced to those who want to step up from purely “social” bowling to the league challenge. We are a competitive but friendly club and Casa Ventura itself is a hub for the local area, offering a wide range of non-bowling activities.

For the second year running Monte Mar Bowls Club were successful in winning the three day La Siesta mixed trip competition. The team consisted of Jean and Rod Chamberlain and skip Bill Young. After winning all their group games they came up against another Monte Mar team in the semi-finals, Ronnie Cairns, June Young and   skip Dave Melville. It was a close fought game but Jean, Rod and Bill were the winners they then had to play one of La Siesta’s strongest teams in the final. La Siesta needed two to draw on the last end, thy were holding two but Bill Young with his last wood drew the shot to win the competition. Well done to Monte Mar.

match. The Torros won on three rinks and the Vulcans won on two rinks. The sixth rink was a draw. It was disappointing for the Torros to lose the shots by 102 to 101, so it was honours even with 7 points a piece. Congratulations to our winning and drawing rinks.

For further information about Monte Mar Bowls and Social Club check out our website www.montemarbowls.com or email us at info@montemarbowls.com. We are also on Facebook.

VCL. The Vikings suffered in the talons of the San Luis Falcons this week, playing at home they just scraped four points which was disappointing. Martin Foulcer, men’s singles won 21-12 against one of San Luis’s star players as did the Pairs duo of Lynne Bishop & Bill Pain winning 14-11. Shots, VB 86 (4) – 117(10) San Luis.

The league tables make interesting reading, keep up the good work everyone.