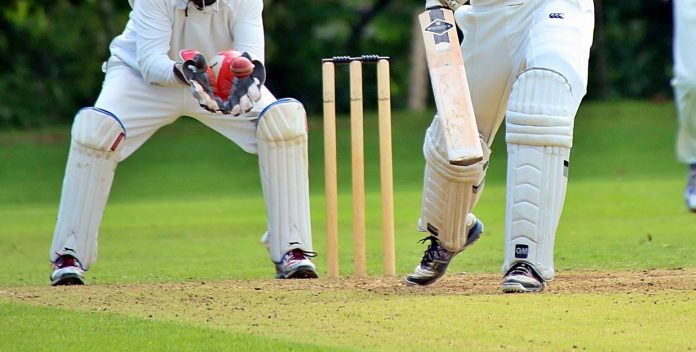 This is Montenotte CC tenth visit so well done to the club for putting up with the Sporting Alfas hospitality for so long, it is a credit to both club and Albir when teams return annually and turn the tour into a family holiday.

On the field SACC won the toss and elected to bat first in the glorious sunshine on this May weekend. The visitors struck early getting Ian Byrne caught at wide cover whilst attempting to spank the first ball he faced into the sea. K Perman joined Fletcher in the middle and the pair took the score to 49 with some exuberant play before Fletcher(29) missed timed one and was caught by SACC player Bash Ali, J Perman joined his elder sibling and again using a flurry of non defensive stroke play took the score to 114, when the well set K Perman walked past, with a swashbuckling bat, the ball and was bowled.

G Crompton, the SACC normal number 2, joined Jack but the score only advanced by 10 before J Perman on 32 was caught by Pium of the bowling of Wijesuriya. This gave Laundon the chance to join his opening partner Crompton in the middle and the score ticked along nicely, Crompton retiring on 52,allowing A Alger to bat, then Laundon on 57 to give C Muñoz his chance, 10 overs to go and 250 on the board the pair should have been set to close out the innings but as often happens C Muñoz tried to over hit the ball and chipped to backward square leg to be out for a solitary 4. P Pennick (27) returned to first team cricket and saw the innings close with A Alger reaching his 53 from the last ball, and a very healthy 317 set. A special first mention to Basherat Ali who bowled for the opposition and fielded for 37 overs.

Tea time and has always an excellent tea awaited the sides, and the twenty minutes allotted to enjoy this always feels like 20 minutes to few. Play resumed and Montenotte openers Skipper A Newton and Geoffrey Evans, last weekends birthday boy and Stag enjoying the banter his stag party never mentioned once by his team mates who were now his opposition. The pair settled in and Bash now back in his own club colours opened with a maiden, Alger giving 6 from his first and that pretty well set the tone, Alger leaking runs and Bash Ali bowling a very tight line, yet it was Alger who claimed the wicket clipping the top of off stump with a beauty. At 10 overs it was 35 for 1 Bash Ali 5 overs 0 for 8 runs well bowled. The first change bowling of Crompton and K Perman kept things pretty much the same and at drinks the visitors were on 83.

Todays spin pairing of J Perman and C Muñoz took the next 10 with only J Perman claiming the wicket of SACC man Geoff Evans who gave the ever present Bash Ali a simple catch. At 30 overs the score had reached 134 for 3 so time for another change. Pennick bowling ´spin´ and Fletcher racing in from a full 11 paces, Puim reached his century, which was the only highlight of the day for our visitors, but have SACC found a new spin bowler as Pennick took 2 for 29 to take the award for best bowling figures of the day although a maiden from the last over of the day gave Fletchers bowling a lift. Again a special mention to Bash Ali who fielded for 77 overs bowled 11 of the and the ball followed him no matter how hard the Skipper tried to give him a break.

Next weekend the league starts at Albir and last years winners Sporting Alfas entertain Madrid United, who we are led to believe have signed a few excellent players to give challenge to the home side. So if you are interested in Cricket please pop down and join our ever extending supporter group who enjoy the talent on show along with the excellent array of refreshments on offer.

Construction of a new Calisthenics Park in Nueva Torrevieja

RUGBY SEVENS RETURN TO VILLAJOYOSA STADIUM NEXT WEEKEND 22-23 MAY