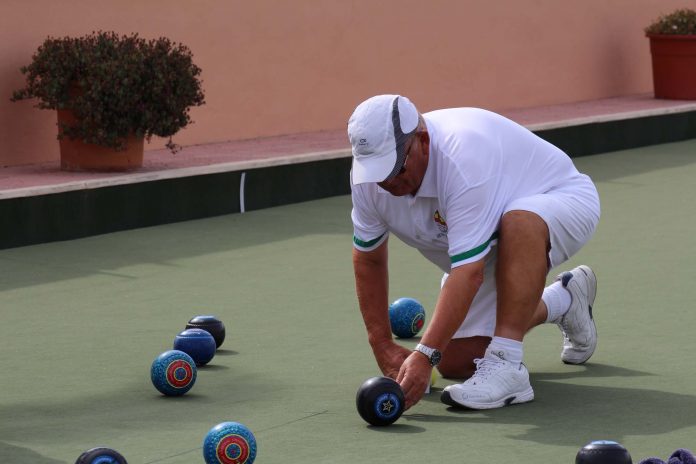 The Explorers travelled to play Quesada Pearls but met a strong team and lost 10-4 although they only narrowly lost the overall score by six shots. Our winners came from Peter Parsons, Phil Pape and Carol Smith plus Alex Whyte, Shirley Hadaway and Janet Parsons.

Winter League at home to BBC and although we lost, it wasn’t a disaster as we achieved four points. Colin Armitage, Dave Taylor, Richard Robinson and Lynne Armitage beat that brilliant Jeff Richards. One of our oldest players, Alan Castle led his rink of Phil Pape, Carol Smith and Kathy Manning to an 18-16 win. The Berleen Boys did it again winning by one. So well done Alex Whyte, Jim Freeman, Mike Surch and Dave Bulfield.

Friday here again and little trip down the road for the Dolphins to play La Manga Crusaders and they surprised a few folk by getting four points. Don Harrison, Reg Jackson and Trevor Hancock a 16-11 win and the travellers return, Barry & Margaret Sadler that is plus Garth Slater with a two shot advantage. Well done the Dolphins.

The Seagulls at home to the San Miguel Cougars lost in a very close game by two shots. Our top rink was Dave Taylor, Gina Hindle and Lynne Armitage. The other two winning rinks won by just one shot each so well done Terry Perchard, Berni Carr and Barbara Forshaw plus John Morgan, Clive Pratt and Dave Bulfield.

The Sharks are the tops this week with a 14-0 beating at home of the San Luis Tigers. Should just about get all the triumphant names in. So well done Alex Whyte, Dave Hadaway, and Maureen Kidd. Dave Lewis, Jim Manning and Margaret McLaughlin. Margaret & Rob Finlayson plus Hilary Cronk. Peter Parsons, Tom Spencer and Andy Bartlett. Alan Castle, Phil Pape and Janet Parsons. And our top lot, Shirley Hadaway, John Mallett and Kathy Manning.

The Pintos started their week with a home fixture against La Siesta Apollos and what a glorious day it was. It was a tight match on play, with most of us I think playing some good woods, but also some that we could hardly believe, a little tricky I think. But we did hold off the opposition to take the rinks 5-1 and the overall shots. Meanwhile the broncos were playing away at Horadada against the Falcons and had a tough match, but played well enough to come away with 2 rinks, always a good away result.

Friday found the Mustangs playing at Quesada against the Swifts and a very pleasant morning it was in good company. As you would expect the Swift took advantage of the home mat, but the Mustangs did manage to come away with 2 rinks and not a great deficit in overall shots. June Whitworth, Jane Hamill and Stew Hamill 20-22. Bob Morgan, Keith Cunningham and David Whitworth 15-18. Ann Taylor, Malc Sykes and Jim Gracie 12-21. Irene Thomson, Jim Taylor and Eddie Thomson 18-14. Barbara Jones, Sheila Cooper and Geoff Jones 8-22. Henry Ryder, Jan Bright and Richard Lee 21-11.

The Roundheads played at home against San Luis Pumas and slipped to a 4-10 Defeat with the aggregate being 95-110,and winners were D Horne K Griffiths T Culpin 24-7,,P Horton D Martin A Padfield  17-15 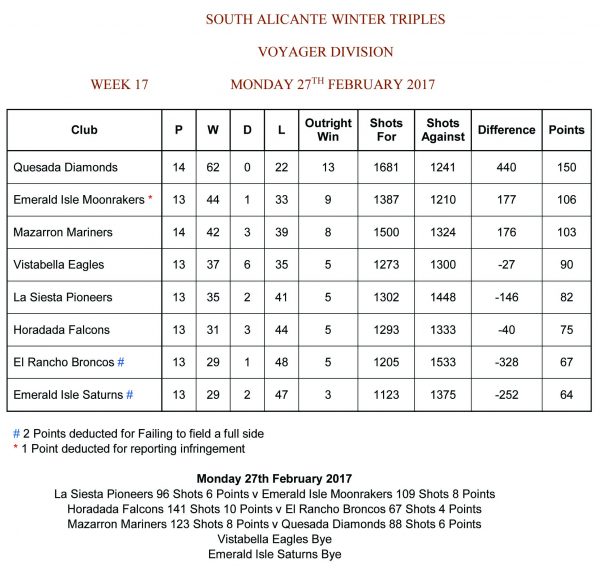 The Apollos travelled to the notoriously difficult El Rancho rink to play the Pintos and only managed to win on one rink. Our winning rink was Beryl Styring, Norman Adcroft and Alex Morrice who mastered the conditions to win by 18 shots to 13.The overall shots score being 85-131.However, despite this loss the Apollos still have a good chance of finishing as league runners up.

The Pioneers entertained the Emerald Isle Moonrakers and in a close contest the rinks were shared with Moonrakers picking up the overall score by 109 shots to 96. The winning rinks for La Siesta were Hilary Clarke, Molly Russell and Rab Logan 31-8, Penny Porter, Alan Ralph and John Clarke 20-12 and in a nailbiting finish Ken Stringfellow, Rod Edgerton and Johnnie Ryder won by a single shot 19-18.

In the Fed 4’s the Parakeets had Emerald Isle Shamrocks as visitors. La Siesta won on two of the tree rinks drawing the other, therefore winning overall by 7 points to 1, overall shots being 66-33. The winning rinks were Joy and Brian Gardiner with Tony Campbell and Jean Cooper 31-7 and Jo Elkin, Irene Mangan with Trish and Pat Reilly who won 20-11. The other rink which was tied saw Irene Laverick, Pat Moore with Pat and Brian Harman winning the final two ends to gain a draw 15-15.

The Hoopoes were away against league leaders San Luis and won on a single rink thereby gaining 2 points. The winning rink was Robert and Ann Heath together with Tony Dalton and John Ball. Barbara and Bill Cooper with Sue Jordan and Mike Edwards needed a hot shot on the final end to gain a valuable draw, and they nearly managed it getting 7 on the final end, thereby losing to a single shot.

The Winter League team travelled to Emerald Isle and unfortunately met with a disappointing 12-0 defeat. Let’s hope for better fortune next week.

The Blues travelled to San Miguel to play the Jaguars and came away with a 10 points to 4 victory. The overall shots being 111-96.The biggest winning rink came from Ann and Robert Heath with Pat Harman who won 19-7. The 3 other winning rinks were Joy Gardiner, John Taylor and Jean Cooper 21-16,Irene Laverick, Brian Gardiner and Brian Harman 17-11 and Beryl Styring, Ramsey Sinclair and Alex Morrice 16-14.

A hard fought match with the Pathfinders on a lovely February morning, not the result we were hoping for. Points Toreadors 4 – 10 Pathfinders. Shots Toreadors 85 – 102. Well done to all the team for their effort on the day.

A more spring-like complexion to this week; a chance to briefly take off the jackets and put on the sun cream!

The Pulsars didn’t do so well away at Vistabella only picking up 3 points.  Well done to Anita Brown, Sheila Booth, Alan Campbell 17-15; Peter Rees, Ron Nairey, John Raby 17 across.  Show for 71, against 116.

The voyager league Eagles had a bye.

One Monday & one Friday game to go, give it your best shot!

The Best Way To Exercise At Home In Lock down | Why You Don’t Need A Gym.

The Best Cycling Gloves | And Here is Why!